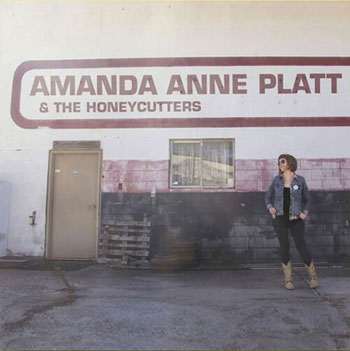 Top billing aside, the new album delivers more of what Honeycutters fans crave: top-notch tunes in a classic country style, leavened with a current-day sensibility that keeps the tunes from feeling too old-school for modern audiences. Even a quick scan of the song titles reveals the kinds of lyrical concerns to which Platt applies her considerable lyrical muse: “”Learning How to Love Him,” “The Things We Call Home, “The Road.”

In the hands of a lesser songwriter, such subjects could be treated in a manner that’s mawkish at best, insincere and pandering at worst. But there’s no danger of any of that on Amanda Anne Platt & the Honeycutters.

At its best – and, it must be said, at its worst as well – country music deals with universal, workaday themes. Amanda Platt has the uncanny knack to tackle those subjects – heartbreak, regret, loss – in a way that reveals just enough of her own private self to give them the indelible stamp of genuineness. And in doing so, she connects with listeners and their own lives.

Hard-learned lessons seem to inform Platt’s lyrics, but there’s a sunny optimism that infuses even the most melancholy sentiments expressed in her compositions. The lyrical imagery in songs like “What We’ve Got” might cause listeners to discover a lump in their throats, or a drop of mist on their cheek.

Miles away from bro-country, Platt’s traditional-minded songs should nonetheless appeal to rock listeners. Jangling, occasionally distorted electric guitar and energetic drumming are all woven into the mix, but they’d used in a way that doesn’t get in the way of the songs.

Call this musical aggregation what you will: Amanda Anne Platt & the Honeycutters are the real deal.