Eric Johnson: A Man and His Guitar 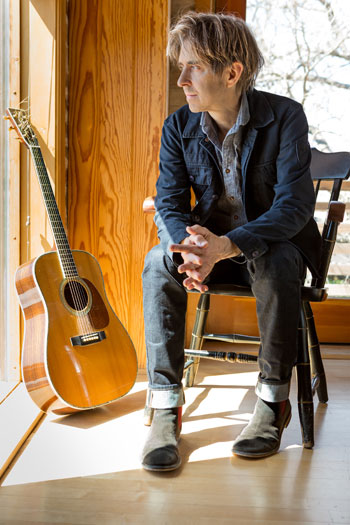 Guitarist Eric Johnson made his name as an electric guitarist; his work on early albums like 1986’s Tones and Ah Via Musicom (from 1990) established him as one of the best and most respected guitar soloists of his generation. But the Texas-born musician has always been about more than the electric guitar. His love of – and dazzling facility on – the acoustic guitar is showcased on EJ, his ninth and most recent studio release. Johnson is currently touring in support of that album, and his shows feature only him, an acoustic guitar, and a piano.

Johnson acknowledges that there are obvious similarities between electric and acoustic guitars. But he says that when he picks up an acoustic, “my approach is pretty different than how I approach the electric guitar.” His goal on the acoustic instrument is to “orchestrate to where it’s as much a complete musical picture as it can be.”

Early after his breakout success, Johnson earned a reputation as a meticulous and painstaking perfectionist; there have routinely been five- and six-year gaps between his album releases. But the straightforward and unadorned aesthetic of EJ – a man and his guitar, with an occasional spot of piano – meant that the sessions went much more quickly than Johnson’s customary way of working. “There was very little ‘production’ involved,” Johnson explains. “It was just a matter of me getting the take.” The sessions – scheduled in between the guitarist’s other activities and commitments – were completed over the course of five or six months.

And the more streamlined process of EJ just might point the way toward Johnson’s future. He says he had been getting bored with the modern way of making records, using ProTools and assembling the songs note by note. “It was becoming a dead-end street to me,” he says. “I started thinking, ‘You know, I just want more life – more heart and more soulfulness – in what I do.’”

Even relatively simple studio techniques like overdubbing are conspicuous in their absence on EJ. The only overdubbing on the album is on tracks where Johnson plays both guitar and piano. “Of course I did do that duet with Doyle Dykes, ‘The World is Waiting for the Sunrise,’” Johnson points out. “But [otherwise] it’s just solo guitar.”

Longtime fans who treasure Johnson’s melodic shredding on tunes like the Grammy Award-winning “Cliffs of Dover” may have to adjust their thinking a bit to appreciate the non-electric nature of his current album and supporting tour. And Johnson admits the the audiences and venues he’s playing on the solo dates are smaller than on his electric tours. “It’s a switch,” he concedes. “And it’s up to me to grow it and stick with it.” But he believes he’s gaining new live concert fans in the process. “I’m getting a lot of people that, actually, I would not get on an electric date,” he says.

The shows in support of EJ aren’t all new material; Johnson digs into his back catalog and has developed solo acoustic arrangements of some of his best-loved songs. “There are a couple songs off Ah Via Musicom I do,” he says. The set includes tunes from Tones, too, and even one from the guitarist’s 1978 debut album, Seven Worlds. “I do a couple of Simon & Garfunkel tunes,” Johnson says, “and I do some stuff that I want to try to record on a Volume 2 acoustic record.” He says that he has already written enough new material for that as-yet-unrecorded album.

Johnson stresses that he hasn’t forsaken the electric guitar for good. He believes that he’s learning a lot about his chosen instrument as he plays the acoustic dates, and that what he learns can inform his future work, whether it’s plugged-in or not. “There’s a lot of stuff I can take with me back to the electric guitar,” he says.