After years of shuttling back and forth between the group’s Boston hometown and gigs in New York City, seven-member band Evolfo relocated to the more creatively fertile landscape of Brooklyn. Guitarist Matt Gibbs says that moving here “shook up my views on music. It made me want to push things harder.”

Keyboardist Rafferty Swink concurs. “It just seems like the right place for us,” he says. “There are so many great things happening here, and there’s more opportunity if you’re a band just starting out.” 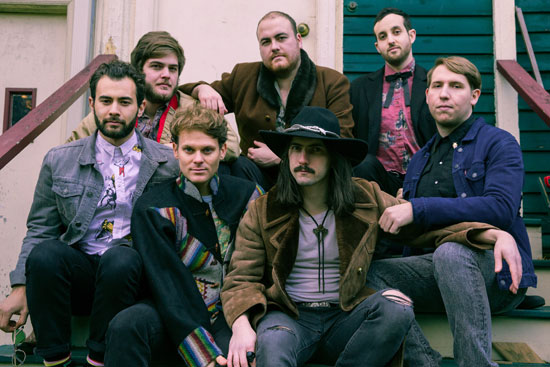 Evolfo started out in 2009 to provide music for a production of William Shakespeare’s play Twelfth Night. But the band’s sound isn’t quite as old-school as a Shakespeare play. The group draws from psychedelia, garage rock and soul, and an effective mixture of all three styles is showcased on The Last of the Acid Cowboys, the band’s debut full-length release.

Seven musicians might seem like a lot of people to fit on a club stage, but Gibbs says that the original concept was for Evolfo to be even larger. “I had this idea of this kind of Parliament-Funkadelic spectacle,” he says. “I wanted the sheer number of people on stage to be a show all in itself, like a big party onstage.” Even in the real-world, scaled-down version of Gibbs’ original idea, there’s a kind of organized chaos with Evolfo.

Gibbs is careful not to make too much of the “garage soul” tag that’s often applied to the band. “What we’ve been doing since we’ve been in Brooklyn,” he says, “is to be ourselves and let those influences kind of come to us in a more organic way … and not let our inhibitions not get the best of us.”

The band headlined the first night of Brooklyn’s three-day Pizza Fest (June 22-24). While not officially associated with the King Pizza label, Evolfo considers itself part of the label’s family. “Everybody there is very generous and interested in helping us,” Gibbs says. “And we just wanted to be part of their community, supporting other bands.”

Over 20 bands – more than half of which are Brooklyn-based – played Pizza Fest 4. Gibbs describes the festival – which was hosted by The Gutter the first two days, and El Cortez on the third day – as “a whole bunch of really high energy bands, plus pizza and beer cans flying through the air.”