Note: this interview with Yes keyboardist Geoff Downes took places just before the group’s summer 2017 run of dates; the tour was canceled in September after the tragic death of Virgil Howe, son of Yes guitarist Steve Howe. – bk

Progressive rock legends Yes will celebrate their 50th anniversary in 2018. Though the band has endured myriad lineup changes – as well as the death of bassist and founding member Chris Squire in 2015 – Yes keeps the prog-rock fires burning for a new generation of listeners. The band was inducted into the Rock & Roll Hall of Fame earlier this year, one of few prog bands to receive the honor. 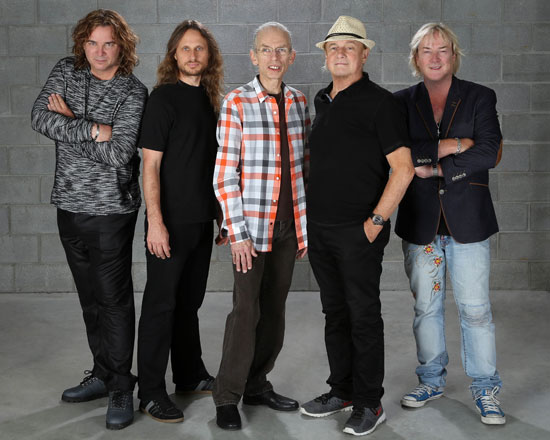 Currently there are two bands touring as Yes. Both feature longtime members of the progressive rock band: the group calling itself “Yes featuring ARW” includes original singer Jon Anderson, celebrated keyboard virtuoso Rick Wakeman, and Trevor Rabin, guitarist in the band 1982-94. The other band – simply known as Yes – is led by guitarist Steve Howe; he’s not the group’s original guitarist, but he joined in 1970.

The Steve Howe-led Yes features several musicians who’ve been with the band – admittedly on and off – for a very long while: drummer Alan White (45 years), bassist Billy Sherwood (7 years, hand-picked by founding bassist Chris Squire as his replacement before Squire’s 2015 death), vocalist Jon Davison (5 years) and keyboardist Geoff Downes.

Keyboardist Geoff Downes might be considered one of the band’s “new guys,” but in fact he’s been in Yes close to nine years (1980-81, and 2011 to present). “I’m up to about 450 shows or something like that with the band,” he says. And Downes is excited to dive deep into Yes’ back catalog for the current “Yestival” tour.

“Yes has such a deep history of music that it’s very, very difficult to pick exactly what to do,” Downes admits, but he says that the band has come up with a novel approach for this tour. They’re playing one song each from every Yes album released between 1969 and 1980. Each album from the group’s self-titled record through 1980’s Drama (which featured Downes) will be spotlighted. For those who are counting, that means ten songs, but it’s worth noting that the shortest track on 1973’s Tales from Topographic Oceans runs more than 18 minutes, so fans will get their money’s worth.

Downes is featured most prominently on two of Yes’ finest albums (1980’s Drama and Fly From Here in 2011) and appreciates that a Yes concert in 2017 has to be carefully put together to appeal to a diverse fan base. “You have to kind of balance it out with the old and the new, if you like,” he says. “And I think we do a fair job of that.” Yes’ set is designed to satisfy all sorts of fans.

And even a ten-song set will provide a widely varying selection of Yes music. “Drama is very intense,” Downes says, “almost like a power rock pop album. Coupling it with the esoteric sides of Tales makes for an interesting combination.” He believes that the set list will showcase the many different sides of the band. “One of the beauties of Yes over the years,” he says, “is that it constantly manages to re-invent itself and yet still retain the integrity of that original sound.”

With the recent deaths of a number of progressive rock’s biggest names – Squire, Keith Emerson, Greg Lake, John Wetton, Allan Holdsworth – Yes remains as one of the few groups from the genre’s beginnings to carry on. And Downes believes he knows why. “The music itself is timeless,” he says. “The sound of the music is much greater the sum of the parts of the individuals.”

Even though the lineup has gone through many iterations – a hardcore Yes fan might refer to it as “Perpetual Change” (a song off 1971’s The Yes Album) – Downes says that “it’s the focus of the central core of musicians that really carries the torch.” Meanwhile, Downes says, “we’re still here; we’ve still got a statement to make, and we’ve still got that great music to perform. And that’s why I’m still out there doing it with Yes.”

If you like reading about Yes, you’ve come to the right place; see links below, and note that it’s not even a complete list of my Yes-related writing.