Paula Boggs: Soulgrass with a Message

Paula Boggs has one of the more unusual biographies in music. Before devoting herself full time to performing and making albums, Boggs was an Army paratrooper, a U.S. Attorney, general counsel for Starbucks, and a vice president at Dell Computer Corporation. But there’s a definite thread running through her history that led her to where she is today, making socially conscious soulgrass with her group.

Though the Seattle-based Paula Boggs Band is nominally folk-protest, its leader’s indefatigable undercurrent of optimism shines through. Inspired to start her band after reading Questlove’s appeal (“I urge and challenge musicians and artists alike to push themselves to be a voice of the times that we live in,” he wrote in 2014), Boggs built a repertoire of original and carefully-chosen covers that expressed her concerns.

The title of Boggs’ 2017 live EP illustrates Paula Boggs’ worldview: Songs of Protest and Hope includes three originals, including “Look Straight Ahead,” a song that she describes as “our prayer for better days.” And the spirit of a past folk-protest era is evoked in live readings of Joni Mitchell’s “Woodstock” and Dino Valenti’s “Get Together.” 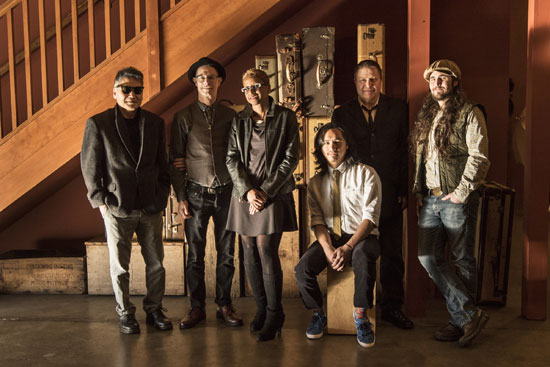 A new original song was premiered days ago, when the Paula Boggs Band took part in a commemoration of the victims of last year’s massacre in Charleston, S.C. “’Benediction’ was inspired by that massacre,” Boggs says. The band was joined by the Mother Emmanuel Gospel Choir. Boggs describes the song as “an example of the music activism we find in our life today.” The song will appear on the band’s next record, Elixir: The Soulgrass Sessions, scheduled for release in September.

Boggs agrees that – thanks in part to Questlove’s urging in the wake of the Trayvon Martin and Michael Brown killings – we may be experiencing another golden age of protest in the arts. “This era has already formed great protest music, and that will always continue,” she says.

Once one goes beyond the surface and begins to understand Boggs’ history, her eventual rebirth as a folk-protest singer doesn’t seem like such a radical career change. “I think there is a constant theme,” Boggs says. “I’m a very mission-oriented person.” She says that whether her job involved jumping out of planes or working in the private sector, she always sought “something that was bigger than me, and that aligned with values I hold.” Her sense of mission was developed early, while attending Catholic elementary school in Maryland.

“My dad was a professor at a historically black college in Virginia,” she says. Both at home and in school Boggs was taught that as someone fortunate, she had responsibilities. “You’ve got to give back,” she says, quoting John F. Kennedy’s paraphrasing the gospel of Luke. “For of those to whom much is given, much is required.”

“Those themes really resonate with me throughout my life journey,” Boggs says. And in each phase of her career, Boggs has been a catalyst for change. “I was a closeted gay person before I joined Dell,” she explains. But once she came out – and as the first openly gay executive at Dell, “it was a movement that led to liberation for me, and it gave permission for other people at Dell to come out of the closet, too.”

At Starbucks, Boggs led the Law and Corporate Affairs Department, “a community of people who wanted to make a difference,” she says. That division provided legal services to the poor, and in Boggs’ words, “became a leader in diversity in the legal profession.”

After she left Starbucks, Boggs was asked to serve on President Obama’s Commission on the Arts and Humanities. While simultaneously getting her music career off the ground, she worked on the Turnaround Arts program, matching celebrity mentors with low-performing elementary and middle schools. Enlisting the aid of classical cellist Yo Yo Ma, actor Sarah Jessica Parker and others, Turnaround Arts demonstrated success, and – thanks to eventual sponsorship by the Kennedy Center — was able to survive into the Trump era.

Once her time on the Commission ended, Boggs put all of her focus on songwriting and performing with her band.

“People often tell us that it’s so cool to come to our performance and actually be able to hear what the musicians are singing,” Boggs says. “To hear the poetry of the lyrics is something that people don’t always get to experience in a gig or concert setting, and so we try to do that.”

The Paula Boggs Band focuses on putting on a show, too. Onstage, each of the five band members switches constantly among several instruments. “We have a lot of three-part harmony, too,” Boggs says. “There’s a lot of emotion on that stage. And we’re multi-racial,”she says with a laugh. “We look like the U.N. up there.”