Note: This feature is based on an interview with King Crimson guitarist/vocalist Jakko Jakszyk. Stay tuned for another Crim feature — coming soon — based on interviews with Tony Levin and Pat Mastelotto. — bk

After decades as a successful touring musician and recording artist, Jakko Jakszyk is fronting the band he discovered in 1969, when he was 11 years old. The British guitarist-vocalist recalls the first time he heard King Crimson’s “21st Century Schizoid Man.” “Even at that tender age, I could tell it was coming from a different place,” he says. “All the other English underground music came out of the British blues boom and psychedelia; this came from somewhere else. It didn’t sound like anyone else. It was riveting, it was scary, and it was virtuosic.”

Fast forward 44 years to 2013: Jakszyk has just joined the latest version of groundbreaking progressive rock giants King Crimson. Initially known among fans as “the seven-headed beast,” the lineup featured founder Robert Fripp plus six other stellar musicians, all of whom had been involved in Crimson-related lineups in the past. That configuration would change slightly in 2017 when (another) drummer was added – bringing the total to four percussionists. The “double quartet” kicked off its Summer tour in Mexico City, with nearly two dozen concert dates including a June 15 performance at Saratoga’s Mountain Winery. “I’m assuming everyone thinks this might be the last hurrah,” Jakszyk says. 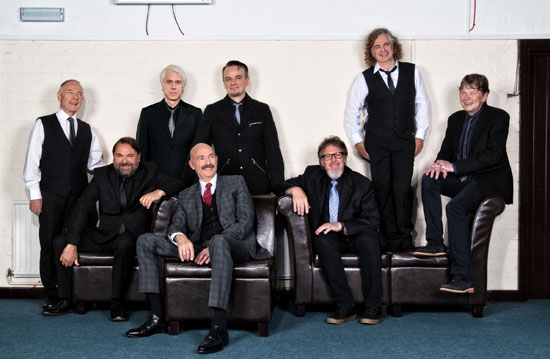 Longtime fans of the band’s musical twists and turns know that King Crimson has never rested on its reputation; most lineups have focused on new material, only occasionally digging into the group’s catalog to play older works. “We are embracing the music as a whole,” explains Jakszyk. “We are playing things that have not been played in decades, or that have never been played live, ever.” He goes on to mention some of the pieces that might be included in the set list, but cautions that it’s all left up to Fripp. “Every morning at about 11 o’clock we all get an email with that evening’s set list. And it’s different every day.”

And different is a hallmark of King Crimson. Over the course of its nearly half-century history, the band has trafficked in wildly varying musical styles. Anchored by guitarist Fripp – the sole constant among the group’s 13 studio albums and numerous tours – King Crimson helped create progressive rock (1969’s In the Court of the Crimson King) and prog-metal (the landmark 1974 LP Red) while elsewhere exploring jazz (Lizard from 1970) and new wave (the band’s trilogy of early 1980s records). If there’s a constant in all that, it’s an uncompromising commitment to musical innovation. Still, “There’s a kind of harmonic approach,” Jakszyk believes, “something about the music which unifies it all. So there’s a continuity in that sense.”

Even within the often knotty arrangements of the band’s material, there remains room for improvisation. With eight musicians onstage, allowing sonic space for each requires keen sensitivity. Jakszyk says that there is a “collective responsibility” among the band members to express themselves within the context of the music. “But there are no hard rules about that,” he says. He smiles as he quotes loosely from former King Crimson drummer Bill Bruford: “King Crimson is the only band where you can regularly play in 15/8 and still stay in nice hotels.”

King Crimson doesn’t adhere to “industry standard” ideas about record releases; there hasn’t been a studio album of new music from the group since 2003. “We don’t live in that world any more,” explains Jakszyk, “where we’re signed to a record label, have to contractually produce an album by the end of November, and then tour it.” He allows that there is in fact plenty of new – and as yet unrecorded – King Crimson music. “We’ve got 3½ hours’ of repertoire, and of that I would say that there are 40 minutes of new material.”

Though he does not consider himself King Crimson’s leader, Robert Fripp is a famously demanding presence. He told The Telegraph‘s Rob Hughes in 2014 that the group’s current lineup is the first in which he doesn’t “sense any animosity or resentment from at least one member in the band.” Jakszyk concurs. “I think [Fripp] ended up with a bunch of guys who enjoy being on the road,” he says. “And in my case, I’m absolutely amazed that I’m doing this at all.”