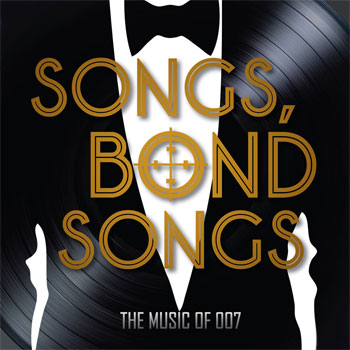 Andrew Curry‘s label has released an impressive clutch of tribute-type albums, including ones focusing on 80s pop, “lite rock” and so on. For the most part, the artists involved tend to fall at least loosely into the power pop subgenre. Curry Cuts’ latest project is Songs, Bond Songs. And as the title (and wonderfully clever cover art and packaging) telegraphs, this new 2CD set is a collection of themes from James Bond films.

For starters, what that means is that the songwriting is of a generally high standard, with a particular underlying style. But there’s a wide stylistic variance among those tunes, and in the hands of modern-day musical interpreters, there at least exists potential for the styles to move in even wider directions.

Most of the songs, then, will be familiar to many listeners (or at least ones of a certain age). 26 tunes from as many artists provides a lot of opportunity for variety, and on that score, Songs, Bond Songs certainly delivers. There’s much less of a power pop nature to the set overall than one might expect, especially considering the artists involved.

There are several real gems among the tracks on this set. Right out of the gate, Lannie Flowers turns in a splendid reading of the “James Bond Theme,” one that knowingly (and briefly) quotes from the Beatles’ Help! soundtrack (which, of course, quoted from the Bond films). He also slips in references to Goldfinger and Live and Let Die. Flowers sets up an incredibly high standard for the album, one that is inevitably met with varying degrees of success.

Jason Berk‘s “Goldfinger” is superb as well. Bringing the lead vocal down an octave from Shirley Bassey’s original, he delivers a dramatic reading that has just the right amount of retro feel. The arrangement is note-perfect as well.

Bratty pop-punk might not seem to be a good stylistic fit for “Thunderball,” but in the hands of Bowling for Soup’s Jaret Reddick, it does work; the result is a bit like the Ramones’ cover of “Spider Man” from the 1995 various artists Saturday Morning album.

Dramatic and sultry trip-hop is the chosen style of Jeff Litman and Andi Rae Healy for an inventive remake of “You Only Live Twice.” Like a select few tracks on this set, this tune could have easily worked in the respective film as well – or possibly better – than the original version.

A stomping rocker with loads of sexy, brassy attitude is Lisa Mychols’ “The Man With the Golden Gun.” It’s easily among the most exciting arrangements on the set. The song’s bridge adopts a completely different feel, which makes the song’s return to its rocking mode even more effective. It’s a stunner.

It’s Gary Frenay, however, who earns the highest praise for his work on Songs, Bond Songs. Imagine if you will that in 1979, the Broccoli/Saltzman group had not chosen Shirley Bassey to sing the theme for “Moonraker.” No, instead they entered some kind of time portal that took them forward to the mid 1980s, where they found themselves with George Harrison, produced by his pal Jeff Lynne. The result of that imaginary scenario can be heard in Frenay’s reading. Harrison’s trademark slide guitar, the rock-steady drumming of Jim Keltner, and the smooth as honey massed vocal harmonies of Lynne are all explicitly evoked in Frenay’s reading. Of course it’s nearly all Frenay himself. Bonus points for a lovely and expressive lead vocal in which the former Flashcube sets aside the pastiche approach and focuses on his own individuality.

The first disc wraps up with a deceptively simple acoustic guitar and vocal reading of “For Your Eyes Only” courtesy of Freedy Johnston. He wrings out a level of emotion only hinted at in the original, and shows that less can indeed be more.

Minky Starshine‘s “Never Say Never Again” (the theme from the non-canonical Bond film of the same name) suffers from relatively weak source material, but he band improves the song vastly by excellent playing, arrangement and vocals, and subtle use of synthesizers.

Duran Duran’s “A View to A Kill” was somewhat over-the-top; wisely, pop auteur Jay Gonzalez takes the song in a very different direction, reinventing the song with a feel that’s halfway between Brazilian pop and Parisian jazz. Gonzales’ approach brings the subtlety in the song’s melody out in ways the original never could.

Phil Ajjarapu‘s “You Know My Name” gives the Chris Cornell original (from the second Casino Royale) a dramatic feel that’s more melodic than might be expected. An echoey production vibe adds just the right amount of sinister mystery.

(Speaking of Casino Royale, here’s my only real disappointment with Songs, Bond Songs: nobody chose to cover the Herb Alpert-led instrumental theme from the – also non-canonical – late 1960s film of the same name. It could have been fun, but then topping the original wouldn’t have been easy).

Whether one on the whole likes the work of Adele or not, her theme from Skyfall is fairly weak stuff. Lindsay Murray (Gretchen’s Wheel), however, does an admirable job of improving upon the original, both vocally and instrumentally.

None of the remaining tracks on Songs, Bond Songs is a complete disaster; some – especially the ones that simply copy the originals rather than swinging for the fences – are wholly unnecessary, but they’re inoffensive and do no serious damage to the originals, the reputation of artists involved, or the project as a whole. A few tracks are problematic owing to the fact that the original songs are pretty dire. Yet some are still pretty good. And there’s always the skip button.

By my math, the above means that more than half of the tracks on Songs, Bond Songs rise to the level of remarkable; for a project of this type, that’s impressive indeed. Highly recommended.