Astrophysics applies principles of chemistry and physics to the study of astronomy in a quest to better understand the universe. It’s heady stuff, and can be intellectually intimidating to the casual observer. Luckily, the world’s most prominent astrophysicist is Neil deGrasse Tyson, who holds a doctorate in the field and also happens to be one of the most engaging speakers on science, its relevance to everyday life and countless other topics. Tyson was in Asheville NC recently, giving a talk titled An Astrophysicist Goes to the Movies.

Tyson’s presentation explored the ways in which astrophysics — and science in general — is portrayed in film. Sometimes it’s depicted accurately, other times not. And Tyson isn’t particularly troubled when Hollywood gets it wrong. “I don’t think it’s harmful at all,” he says with a laugh. “If it forms an excuse to talk about the science. That’s better than the film not having any science in it at all.” 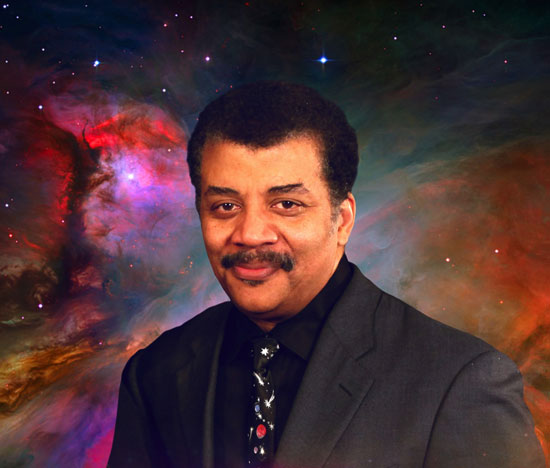 Science interacts with the everyday world in the political sphere, as well, and when it gets co-opted by politics, the results can be dangerous. Tyson calls that situation “a recipe for the unraveling of an informed democracy.” Recently, he tweeted to his 7.5 million Twitter followers, “To be scientifically literate is to empower yourself to know when someone else is full of shit.” Tyson is convinced that for example, if our political leaders and representatives had been properly educated in science when they were students, they would make better decisions on matters pertaining to climate change and related issues.

“If you have leaders who are cherry-picking science results, who are in denial of emergent scientific truths, then it’s because they do not know what science is and how and why it works,” Tyson says. He’s convinced that even willful skeptics in government who base their positions on political expediency would benefit from education. If they understood how and why science works, he believes, “they would be incapable of thinking that way about the topic.”

And Tyson emphasizes that he doesn’t think science is a left vs. right issue. He gives the example of a hypothetical right-leaning elected official asking himself or herself, “Given that humans are warming the planet, how can I make legislation that favors my political agenda?” A conservative politician might favor a certain subsidy while opposing a tariff or carbon credit. “Those are political decisions,” he says, but the truths upon which they are based remain consistent.

Tyson says that students sometimes choose classes in astronomy over ones in chemistry or physics with the idea that the study of space is less intimidating. He acknowledges that his field is — from an educational perspective — a “gateway drug.” Astronomy classes teach students about geology, chemistry and other disciplines. “Fluency in astrophysics can be a pathway to fluency in STEM [science, technology, engineering and mathematics] fields in general,” he believes.

Explaining scientific concepts and phenomena in an accessible manner is Tyson’s specialty. The recipient of 19 honorary doctorates and the NASA Distinguished Service Medal, he is also the host of television and radio programs (StarTalk Radio, Cosmos: A Spacetime Odyssey, NOVA ScienceNOW,) that demystify astrophysics. Tyson is fond of explaining dense concepts through real-world examples.

He points to, as evidence, an October 2015 pro football game in sudden death overtime. The Cincinnati Bengals decided to try for a 42-yard field goal to win the game. Tyson watched on TV as the ball was kicked, veered left, hit against the left upright of the goal post, and careened in for the win. “I did a quick calculation,” he recalls, figuring in “the latitude of the stadium, the orientation, distance and hang time.” And he made a discovery: The winning field goal was likely assisted by a third of an inch deflection to the right from the earth’s rotation.

He tweeted about it, and the level of interest was overwhelming. “All I did was attach science to our collective pop culture. I could have instead said, ‘Class, sit down for a lecture on the Coriolis effect.’” He laughs and adds, “But no, you don’t want that.”

He’s fond of those teachable moments: “Now that your interest is piqued, I can tell you how that happens. You came for the pop culture, but you stayed for the science.”