Album Review: The Bye Bye Blackbirds — Take Out the Poison 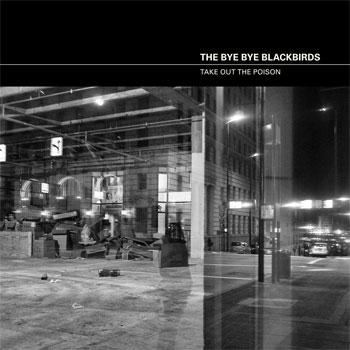 The Bye Bye Blackbirds’ fourth album, 2013’s We Need the Rain was characterized by a seeming desire to exemplify the best of what makes powerpop appealing while moving beyond its relatively confining parameters on some of the album’s material. While We Need the Rain was an excellent record, the presence of those twin goals made for a slightly uneasy musical coexistence.

In the three years since that album’s release, Bradley Skaught and his band mates in the Bye Bye Blackbirds seem to have resolved the challenging dichotomy between musical styles. Take out the Poison is a sturdily consistent album that doesn’t shy away at all from the tension between powerpop and other genres/subgenres. No, this album revels in those seemingly incompatible forms.

“Let Your Hair Fall Down” has at least two lyrical hooks, and its musical hook is a set of beefy horn charts that recall the brass arrangements on Big Star’s Radio City. The sensitive singer/songwriter style gets a workout on the acoustic, baroque “I Meant to Write.” “Alfred Starr Hamilton” has a 1990s jangle-rock vibe with just a touch of pearljamminess.

But the twin attack of harmony and punch that’s a necessary ingredient of successful powerpop is part of most every track on Take out the Poison. The playing is first-rate, featuring several of California’s top pop purveyors. Several of those ( KC Bowman, Charlie Crabtree, guest musician Khoi Huynh) are closely associated with the reliable great Mystery Lawn Music, but Take Out the Poison is a self-released effort.

If there’s a critics of the album – and a mild one at that – it’s only that the band relies to a great degree upon the strength of its stable of female guest vocalists. Let me clarify: the problem isn’t their presence, not all; they’re consistently great, and add a lot to the tunes. No, it’s the fact that they’re not members of the group. When a band creates an album that has as one of its most remarkable features the presence of people not in the group, it’s a potential cause for concern.

But let’s hope not. Because Take Out the Poison is an effective synthesis of styles that never really calls attention to the fact that it’s seeking to combine those styles. Powerpop fans won’t find it too far outside the range of the narrowly-defined subgenre, and – perhaps more significantly – listeners who have no particular love for powerpop will be drawn in by the great songwriting, arrangement, playing and vocals.