Over the years, several recording artists have chosen to record entire albums of nothing but Jimmy Webb songs. Johnny Rivers was the first to do so, on his 1967 album Rewind. Also in 1967, The 5th Dimension recorded 16 Webb originals, spread across two albums. The following year, Irish actor-turned-singer Richard Harris released a pair of albums – A Tramp Shining and The Yard Went on Forever – of Jimmy Webb’s music. In 1969, Thelma Houston’s Sunshower showcased 11 Webb compositions. Continuing the at-least-one-a-year streak, the psychedelic soul band Revelation’s self-titled 1970 debut featured a dozen tunes penned by Webb.

Richard Harris’ 1971 album My Boy featured four of Webb’s songs. An under-appreciated 1972 album, The Supremes Produced and Arranged by Jimmy Webb also featured Webb in the role of producer-arranger. The title of Glen Campbell’s 1974 album says it all: Reunion: The Songs of Jimmy Webb. In 1975 The 5th Dimension’s Earthbound included six Webb originals, and once again Webb produced and arranged the sessions. Art Garfunkel’s 1977 LP Watermark included 10 Webb originals. More recently, a 2010 album by Doug Howell (Jimmy & Me) included 11 songs by Jimmy Webb.

Alongside his wildly successful career as a songwriter, Webb started making albums of his own with 1970’s Words and Music. There also exists a 1967 album called Jim Webb Sings Jim Webb; he doesn’t like to talk about that one, but Webb does address it in the pages of The Cake and the Rain. It seems that once Webb began having success as a songwriter, the owner of a studio where he had cut some demos decided to capitalize on the situation and release those tapes. Webb was livid; he does not consider Jim Webb Sings Jim Webb a legitimate release. And besides, it’s always “Jimmy,” never “Jim.” 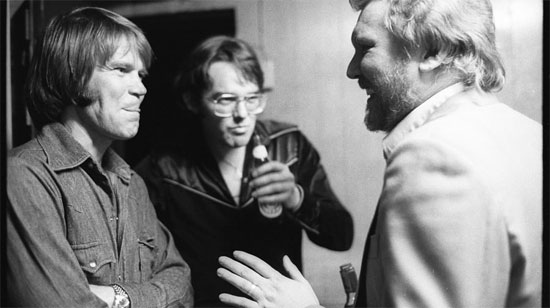 Webb’s official albums sound quite different from the simple demos of that non-sanctioned release, anyway. Early on, Webb developed his skills as an arranger, and applied those skills to both his own work and the recordings of others. Yet despite his success overseeing studio sessions, he has never considered himself an effective producer of his own material; he believes others do that job better.

“I should have always had a producer,” Webb admits. “I was never a very good producer for myself, particularly when it came to getting the right sound on instruments and things like that. I could have benefited greatly had I been a little bit more open.” With the benefit of hindsight, he says that Richard Perry would have been a good choice to produce Words and Music; instead Webb took on that role himself. “At the time, I thought I knew everything. And of course I was doing it perfectly,” he says, his voice dripping with sarcasm.

Ceding production responsibilities to someone else allows a musician to concentrate on other important matters, Webb believes. “When there’s a producer in there, it really lets the performer sort of let that go as a mental burden and concentrate: ‘Let’s get the notes right, let’s get the chords right and above all, let’s get the tempo and the feeling right.’”

He recalls listening to one of his finished recordings and thinking, “Oh damn, too fast, too fast.” Of course by that time, the records were pressed and distributed, and it was too late to do anything about it. “The producer has a really good, legitimate reason for being in the studio,” Webb concludes. “It’s not just a made-up job. I had Linda Ronstadt produce me once [Suspending Disbelief, 1993], and it was one of the best records I ever made. So producers are important; I was a little remiss, and I came late to that realization.”

These days, Webb lives on Long Island with his wife, Laura Savini. When he’s not writing songs, performing live or doing press for The Cake and the Rain, his activities include serving as a board member for ASCAP, the songwriters’ performance rights organization. In 2006 he received that organization’s Voice of Music Award, recognizing him as as an “exemplary advocate for the rights of creators.” For several years beginning in 2009 he served as ASCAP’s Vice Chair.

Jimmy Webb continues to earn accolades and recognition for his work as a songwriter. The latest example of this is a “A Celebration of the Music of Jimmy Webb: The Cake and the Rain,” a May 2017 all-star tribute staged at Carnegie Hall in New York City. The lineup included a long list of artists who have recorded his music, including Art Garfunkel, Marilyn McCoo and Billy Davis Jr. (their old group The 5th Dimension first scored a lit with Webb’s “Up, Up and Away” in 1967), Webb’s old employer Johnny Rivers, Ashley Campbell (Glen Campbell’s daughter), Dwight Yoakam, Toby Keith, Amy Grant, Judy Collins, Hanson, Graham Nash and others.

Webb is humbled by such tributes, but he does recognize his place in the history of popular music. “I remember the first time I heard Mr. Sinatra singing ‘Didn’t We,’” he says. Once again Webb was listening to his car radio when it happened. “I just kind of leaned back in my chair, put my hands straight out on the steering wheel, and listened. I thought, ‘This is history; this is history. Now I’m part of this. I’m part of the history of this great man’s life.’”