Webb thinks he knows why the songs-and-stories format works well for artists who have been around awhile. “It becomes easier with age,” he says. “I remember being in my teens and twenties and performing, and having absolutely nothing to say. Because [at that age] you don’t have much in your head. You’ve got high school, and you’ve got a couple of girlfriends who probably let you down pretty hard.” Once you’ve lived awhile, Webb believes, the stories come naturally.

“I’ve had a lot of experiences in my lifetime,” Webb says. “Some of them I’m not particularly proud of – some of the funniest ones I’m not proud of – and I’m not recalcitrant when it comes to sharing my experience, even if it puts me in a bad light for the moment. That’s okay; the audience can have a chuckle. I laugh at myself because what a fool I was, and then we sort of go on with the show. It really becomes an evening’s entertainment.” 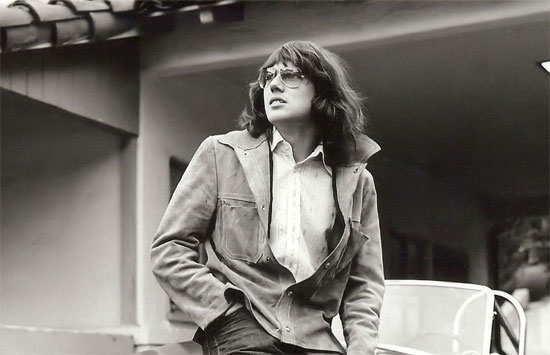 Once the show is over, it’s the audience’s turn. “After every show, I go out and meet the audience,” Webb says. He’s happy to sign memorabilia, but what most people want to do is tell their own stories. And he listens. “You’d be surprised how many people have a story they want to tell,” he says. “I’m usually there for at least an hour after the show ends.”

Looking back upon a half-century career filled with success and acclaim, it’s worth asking at what point Jimmy Webb felt that he had “made it.” Faced with that question, at first Webb demurs. “I’m an Okie, and I come from the sandy land cotton country of western Oklahoma. And I don’t ever feel like I’ve made it. I always have a healthy skepticism about any run of good luck or any event, no matter how fortuitous; I think we’re all on thin ice.”

But Webb does admit to having experienced some very gratifying moments in his life. He shares one of the earliest and most important. “I had decided when I was 14 years old that I loved Glen Campbell. I was a farm worker then; I was driving a tractor. I heard this song, ‘Turn Around Look at Me’ on my transistor radio, and I went nuts! The nearest record store was 22 miles away, but I borrowed some money from my father and I drove over there to Beaver, Oklahoma and bought that record. I brought it home and I wore that record out.”

Hearing that 1961 single truly changed Jimmy Webb’s life. “I got down on my knees by my bed one night,” Webb recalls. “And I prayed to God, ‘Please, Lord, let me write a song for Glen Campbell.’” Four years later, his prayer was answered. “Now, that’s the truth,” Webb adds.

But the years between that prayer and writing that song for Campbell were difficult ones for Webb. His mother had passed away, and Webb’s father had moved the family to California. Eventually, the elder Webb made the decision to move back east, but Jimmy decided to stay behind and pursue songwriting. “I was in California by myself,” Webb recalls. “I was sleeping on an air mattress, and I was carrying my songs around from place to place. My father worried about me a lot in Hollywood; he thought that I was doomed to be attacked in an alley somewhere, because he knew I was living pretty close to the bone.”

Webb had borrowed $1000 from some friends; he used the cash to buy a Volkswagen Beetle. One day as he was driving in L.A., he heard the deejay on KHJ, the local Top 40 radio station. “He came on and said, ‘Here’s the new single by Glen Campbell!’ And it was ‘By the Time I Get to Phoenix.’” This came as a total surprise to the young songwriter; he had no idea that Campbell even knew of the song, which had first been recorded by Johnny Rivers. At the time, Webb was a contract writer for Rivers.

“I was driving down Hollywood Boulevard, listening to Glen Campbell sing my song,” Webb recalls with great pride. “And I was a serious threat to the public’s well-being, because I was all over the road, whooping and hollering and carrying on. Finally, I pulled over. The tears were rolling down my face, because it actually happened. It came true. Any way you want to cut it, God had answered that prayer.”

“By the Time I Get to Phoenix” would become a hit for Campbell, and would subsequently be covered by many artists in many styles. But none was as unusual and unlikely as Isaac Hayes’ version, a nearly 19-minute arrangement that filled nearly all of the second side of his 1969 LP Hot Buttered Soul. Webb admits that he “didn’t know what to make of it” when he saw the song listed on the LP jacket. He saw the track’s run time, and thought to himself, “Oh my God; that’s impossible. But okay, let’s listen to it.”

He was intrigued as he heard Hayes’ long spoken monologue; “I guess it was early rap,” Webb says. “It was hinged on telling a whole story. So I listened patiently, until finally somewhere toward the end, he got around to singing the song!” Webb laughs as he recalls his thoughts at the time. “Many, many unusual things had happened to me, but I thought, ‘Well, I guess anything is possible.’” The song helped propel Hayes’ Hot Buttered Soul to the #1 spot on the U.S. R&B chart.