“It’s an enviable position to be in,” Webb says, “when you have an artist coming to you – like Mr. [Frank] Sinatra – saying, ‘I need a song for my next album.’” Ol’ Blue Eyes recorded at least three Webb songs, including “Didn’t We” and “Whatever Happened to Christmas.” The latter was written specifically for Sinatra’s 1968 LP The Sinatra Family Wish You a Merry Christmas.

But Webb says that the songs that he would “cast and build” for a specific artist such as Sinatra or Barbra Streisand have always been the minority of his body of work. “Most of the songs that I’ve written in my life, I’ve just written right off the top of my head,” he says. “I let them hit the ceiling, and whatever happens to them, happens to them. The songs go where they want to go.” 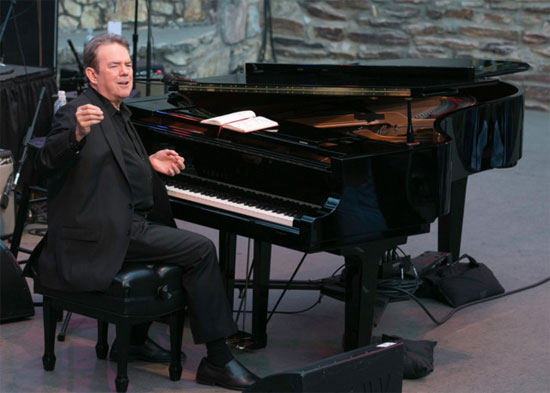 Webb doesn’t shy away from the fact that some of his songs are part of what’s known as the Great American Songbook. He notes that over the years he’s often been able to “sit down and craft things that sound James Van Heusen-y, or like [songs by] Harold Arlen and Johnny Mercer.” He hastens to add, however, “I would never actually put myself in the same class with Johnny Mercer, but I was sort of attempting to emulate some of those older styles for artists who had been around for a long time. And that was fun; that was real songwriting.”

Writing in the pages of The Cake and the Rain about his prodigious songwriting output in the 1960s, Webb says, “Writing hit songs was so damn easy I fantasized I could write one whenever I wanted or needed to. My songs dominated easy listening pop radio … I was one of the first guys since Burt Bacharach and Hal David to be famous for writing songs. I wasn’t a Beatle. I wasn’t a bandleader or an arranger [that would come later – ed.] And I was definitely not a performer.”

But Webb’s performing and recording career would come soon enough. Webb says that when he began performing his own material – his debut album Words and Music was released in 1970 – that kind of songwriting was practically nonexistent. “I just did my songs the way I felt the songs should be done,” he says, “and then the writers and singers – people like Judy Collins – would come in and hear ‘The Moon’s a Harsh Mistress’ on my album. And they’d be off and running with a version of their own.” In fact a half dozen artists have recorded that song: Webb himself on his 1977 album El Mirage; Campbell, Collins, Ronstadt, Joe Cocker, Josh Groban and others.

Jimmy Webb is known more as a songwriter than a vocalist; that makes him part of a grand tradition that includes Leonard Cohen, Bob Dylan and a select few others. As a live performer, his appeal lies squarely between his songwriting prowess and his skill at sharing engaging anecdotes. “Hopefully I don’t drone on; it’s meant to be an entertainment,” he says. “And if the patter is less than hilarious at times, I flatter myself that it’s always amusing to some degree.”

Webb characterizes his between-song monologue style as “a peek behind the curtain into that world where you’re sitting in a room with Frank Sinatra, and you’re playing a song for him.” He aims to convey to audiences “what that feels like to a 20 year old kid.” It really did happen to Webb at age 20, and he quickly came to a realization. “You write a song for someone, and then all of a sudden you’re a part of that person’s life,” he says, “whether you like it or not.”

By all accounts, most of the time Webb did like it. Though The Cake and the Rain recounts his tumultuous friendship and working relationship with Richard Harris (the first artist to score with a massive hit in “MacArthur Park”), it also features the delightful story of his meeting Louis Armstrong.

“I was barely 16 years old when that happened,” Webb recalls. He met the jazz legend in a musicians’ break room in Las Vegas, and initially didn’t know who the older gentleman was. At that time Webb was an aspiring – but as yet largely unsuccessful – songwriter. “He read one of my songs, and played a little bit of it on his trumpet,” Webb says. “And he told me, ‘Just stick with it.’” That encouragement would sustain Webb in the years to come. “Many, many times I have heard his voice in my ear when things weren’t going so well. I would be in a motel room somewhere, waiting to do some shows for peanuts and I’d hear Louis Armstrong saying, ‘You just stick with it!’”

Webb’s live show is filled with similar accounts, stories that are in turn funny and heartwarming. He hopes that what he calls a running commentary “educates, entertains and is not too long-winded.” Webb emphasizes that even with all the talking, he still plays a lot of songs over the course of an evening’s performance. “I could do two hours of music,” he says. “I really put the anecdotal stuff in there as a kind of break from just slamming song after song after song at the audience.” Calling it a more modern way of presenting his music, Webb makes no claim to having invented the performance style. “The stories are the easiest part,” he admits.