Tuxedo is a retro-funk duo fronted by two established artists. Mayer Hawthorne made his name as a modern-day soul crooner with a style firmly rooted in the music of his Detroit hometown. Seattle-based Jake One is a hip-hop producer and member of the famed Rhymesayers Syndicate. Both have earned Grammy nominations for their past work. But Tuxedo finds both artists working outside their customary musical idioms: their two albums (2015’s Tuxedo and 2017’s Tuxedo II) are packed with ’80s-styled dance funk.

Though both men have extensive backgrounds working behind the recording console, the aesthetic for Tuxedo’s music is focused on keeping it real, both onstage and in the studio. “Everything we’re doing is real instruments,” says Jake One. And Hawthorne happily admits that on dancefloor tracks like Tuxedo II‘s “Fux with the Tux,” one can hear “a lot of analog hiss, a lot of weird crackles and pops that happen randomly. And that’s part of the magic.” 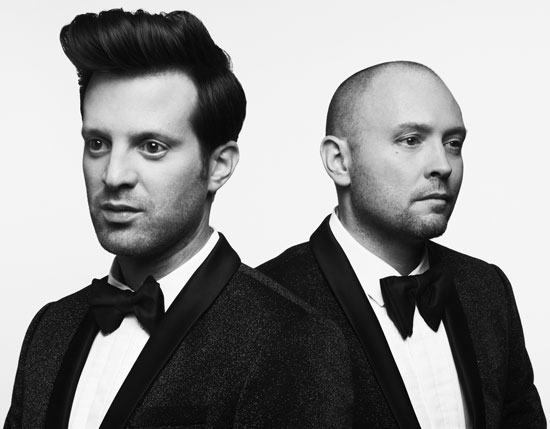 Autotune is a widely used plugin that “corrects” off-key singing. But you won’t hear any autotuned vocals on a Tuxedo track. Virtual (software-based) instruments are a low-cost option that can open up a variety of sound textures for recording artists; Tuxedo stays away from that innovation as well. Jake One says that the virtual versions of synthesizers like the vintage Memory Moog are “just too perfect for whatever reason. And that’s not what we’re going for.”

“Perfect is boring,” adds Hawthorne with a laugh.

Tuxedo’s music recalls the dance funk of groups like Klymaxx, Zapp, Chic and Cameo, but subtly updates the style with original tunes that have a modern hip-hop sensibility. Yet Hawthorne and Jake One are careful not to let modernity take things too far from their musical concept. “It’s a rule,” Hawthorne explains. “We don’t record songs over the internet. Jake lives in Seattle and I live in Los Angeles, but whenever we are recording a Tuxedo song, we are always in the studio together.”

The duo’s creative process is truly collaborative. Jake and Hawthorne bounce lyrical ideas off one another, and both work on the instrumental tracks (Jake One plays keyboards, while Hawthorne adds guitar and more keys). “That’s the fun in it,” says Jake. “For most of my other productions, I’m literally handing stuff off to an artist, and they can do what they want with it. With Tuxedo there’s a real group dynamic.”

The group dynamic extends to Tuxedo’s exuberant live show, featuring Hawthorne on lead vocals and occasional guitar, Jake One on keys, plus a real band (guitar, bass, drums, female backing vocalist) that lays down plenty of dance moves. The band’s success has surprised even its leaders. “There were no expectations on the first go-around,” Jake One admits. “I wasn’t even thinking we’d ever do a show with the band, period.”

Jake says that the popularity of Tuxedo’s world tour and pair of albums has raised the stakes, and opened up opportunities for the future. “Maybe,” he jokes, “the next album will be full of Autotune and plugins!”