What’s the status of the crowd funding project for Tales from the Vault?

Tales From The Vault turned into a bit of a disaster, actually. There were some older tracks that I’d done before with Ernest and Joel but I never finished; I was going to finish them for the pledge campaign, but basically the money ran out. Compared to other people I don’t produce albums very quickly. So I ended up not using some of those tunes; it wasn’t financially possible for me to do it.

Tell me about the new album you have in the works.

For the very newest album with Virgil Donati, Jimmy Haslip and Jimmy Johnson, I basically did it on the computer. And I had a hard time with that, because I’m not very savvy with computers. I use the computer in a very limited manner; I use it like an old-fashioned tape machine: Play, forward, fast forward and rewind. That’s about as much as I know!

The record is for Steve Vai’s Favored Nations label. It’s been very energetic, and I’ve been inspired to write tunes for the band. It will get finished before the end of this year, because I’ve decided I wasn’t going to be doing any touring – or very limited touring – because I’m too old. I don’t enjoy it anymore. I like playing, but I don’t like the traveling part; I don’t like airplanes, and I don’t like going through security.

Part of the reason it was so long between records is that I’ve moved three or four times in that period. And each time we had to pull the studio apart and rebuild it somewhere else. So I didn’t have anywhere to work, really. Combine that with being on the road, and I never seemed to have the time to do it. That’s why I decided to take some time off to work on these recordings. The down-side of that is trying to survive: when I’m working on a record, I’m not making any money.

Other than using computers instead of two-inch tape, how would you say that your approach to making albums has changed over the years?

It’s basically changed by default, just by the way people do things. Before – in the old days – people would rent a really nice studio for a few days, and we could play everything more or less together. And if we had to overdub something, that was fine. Then we’d spend a few days or a week or so mixing it, and then Bob’s your uncle.

But now people just send files over the internet, and more often than not, you’re not in the same room, or at least not at the same time. The technology forced a change; that’s why so many studios went out of business.

Do you think something’s been lost with the demise of the old way of doing things?

Yeah, you always lose something. But you gain things, too. It’s possible to make very high quality digital recordings if you use very high sample frequencies like 96kHz or above.

Still, anybody who’s worked on a really great analog two inch tape machine in a studio knows that you can’t do that on a little digital recorder. It’s blatantly obvious, but nobody cares. They’re playing it all over their iPhone!

I have to ask about the box set’s title. It doesn’t sound like something that you would do, to call them up and say, “Hey, here’s what I’d like you to call it.”

I was absolutely horrified when I saw the box set. I never saw the actual cover until it was already in production. I went ballistic: “You can’t say that on the front of an album, ‘The Man Who Changed Guitar Forever!’” I would like if you could explain to your readers that I didn’t know about that. When I saw the title, I went, “Aaahhh!”

The guys know me; they know my personality. You know, it’s not something I’d say: “Here I come, king of men.” I heard it was just going to be called The Allan Holdsworth Album Collection. It was too late to shake the tree. Some of the material suffered from the amount of time since the masters were made, and I know that the record company had spent a lot of money on remastering. In the end, I just said, “Well, it’s my own fault; I should have asked them to show me exactly what they were doing.” It was just unexpected, that’s all.

They did a great job on everything else. It’s a limited edition; the box will go away, and eventually there will just be individual albums. 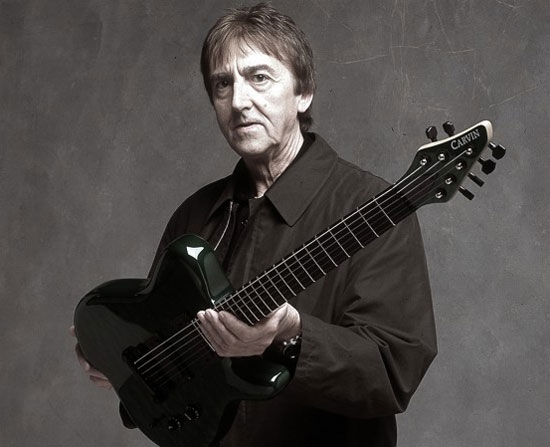 You’ve been a musician most of your life, and a recording artist for nearly 50 years. Was there a point in your career when you thought to yourself, “I’ve made it”?

No, I never thought of it like that. Like a lot of musicians, I was just trying to survive, but survive doing something that I really enjoyed as opposed to it turning into a day job. So I got the pleasure from that, and I could continue to learn.

And that never stops. I’ve known a long time ago that I’ll never really know very much about music, no matter how long I live. That’s just how it is: when you get over one milestone, there’s another one bigger than the last one.