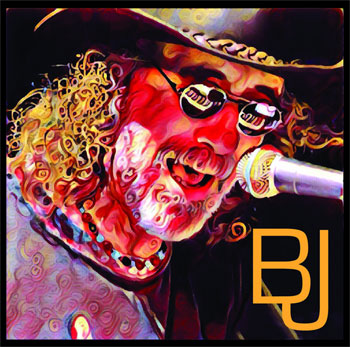 You know that Morning Edition theme on National Public Radio? BJ Leiderman wrote that, and a lot more for NPR besides. Understandably wanting to trade on those achievements, the 61-year old musician-composer planned to title his debut album Natural Public Leiderman (get it?) but apparently cooler – or more litigation-focused – minds prevailed, and after a lengthy gestation, the album has finally appeared under the simple title of BJ.

A hallmark of Leiderman’s NPR work – and what makes it so effective – is its earworm quality. The ability to write a “hook” – a signature melody – is almost a mystical thing. There are, after all, only twelve notes in the Western scale, and a finite number of sequences in which they can be arranged. From that latter number, remove all the ones that sound “wrong” (unless you’re an avant-garde composer or listener) and you’re left with not all that many. Now strip out all the ones that have been used (the “Smoke on the Water” riff, the opening strains of “Sunshine of Your Love,” the annoying melody of Frank Mills’ “Music Box Dancer” … all of ’em) and you get a sense of how difficult it is to create a new one.

Heck, even the composer of the “All Things Considered” theme couldn’t do it: that melody, based around an eight-note motif played in a succession of keys, is unnervingly similar to “Pattern No. 58” in Jerry Coker’s seminal workbook published in 1970, Patterns for Jazz. But Leiderman didn’t write (or “write”) the “ATC” theme.

Asheville-based Leiderman’s seemingly effortless ability to craft the aforementioned hooks is on brilliant display throughout the fifteen tunes on BJ. With a style – both vocally and instrumentally – reminiscent of 70s hitmaker Andrew Gold (the guy whose “Thank You for Being a Friend” would find an eventual home as the theme song for The Golden Girls), Leiderman has a (mostly) winning sense of humor that pervades these songs.

There’s nothing especially contemporary about the songs on BJ; timeless might be a better word. These tunes could have been written and/or recorded at most any time after the early ’70s invasion of the singer-songwriter (Carole King, Jackson Browne, James Taylor). But Leiderman has a pop sensibility – meant here in the best way – that among that crowd, only King would possess.

Leiderman’s lyrics are often silly but smart; they’re the kind of lyrics that will appeal to fans of Garrison Keillor, former longtime host of A Prairie Home Companion. Of course neither Keillor nor most of his guests would have ever contemplated a song like “Bitch,” a superficially nasty but ultimately fun and upbeat tune on BJ.

BJ Leiderman’s acoustic piano and voice are at the center of most every track; his youthful vocals never for a moment suggest that Leiderman is into his seventh decade on this planet. And supple, flawless accompaniment is consistently provided by the musicians backing Leiderman.

It would be a misstatement to suggest that BJ is a rocking album, but there are moments of near-rocking on “Pray” (Billy Joel style) and “Waterside” (shades of Elton John).

Now and then, however, Leiderman seems in danger of losing his musical identity completely: “Money” sounds uncannily like a previously-unheard track off of 52nd Street. The world does not need two Billy Joels, thank you. And occasionally the album veers toward lighter-than-air, Weather Channel “Local on the 8’s” territory: the instrumental “Bela BJ 1” does feature Bela Fleck, but the juxtaposition of Clavinet and banjo is perhaps a bit too slick. (And BJ‘s three takes on the approach is at least two too many.) Finally, though its title is clever enough, the brief faux-outtake “Weekend Perdition” is a pointless note upon which to end an otherwise solid collection.

But those are outliers; most of BJ is memorably tuneful fare. Some of it’s quite funny, like “Mom’s Telephone Messages,” a track reminiscent in its structure of Ben Folds Five’s “Your Most Valuable Possession.” And the occasional weighty lyrical themes – helpfully telegraphed by titles like “History 911” and the gospel-flavored “Praise One Another” are delivered in heartfelt style without a hint of maudlin sentiment.

Ultimately, BJ Leiderman’s self-titled debut album is an uneven collection of songs, one that could have benefited from some judicious pruning. But its high points remain many, and BJ is well worth a listen.