Such unsolicited advice wasn’t limited to garden-variety fans, either. “Kim Fowley had a funny idea,” Petersson recalls. The L.A. scenester and self-styled Svengali was an early fan of Cheap Trick when the band was without a deal and playing clubs like the Starwood. “There’d be eight people in the audience,” Petersson laughs, “and two of them were Ron and Russell Mael from Sparks. And Kim was one of the other ones.”

The bassist continues with the story. “He came up to us and said, ‘I love your band, but you know what you ought to do to really make yourself stand out? Get dressed up and made up like 90 year old men! They’d see you come out there with walkers and canes, and then you’d just get out there and just rock out. People would be completely flipped out!’” 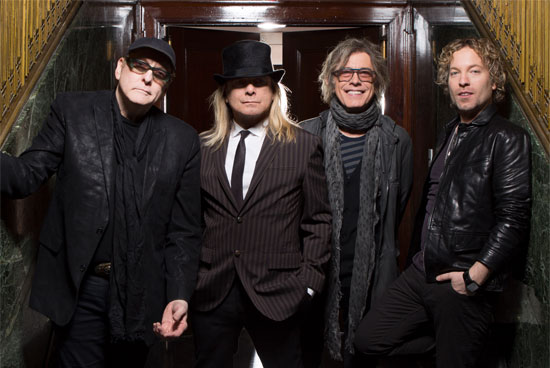 Of course Cheap Trick passed on that suggestion. But the 67-year-old Petersson quips, “I guess naturally that’s what we are now.” But since Fowley passed away in 2015, “he can’t see his idea reaching fruition.”

Cheap Trick did establish its own branding quite early; the band’s logo is nearly universally recognized. But Petersson blanches at any comparison to his band’s marketing/branding approach with that of another band that came to popularity in the 1970s. “Well, as opposed to KISS, what we did was really natural,” he says. “It really was just our personalities; we just were who we were. It wasn’t like all of a sudden, ‘Okay now you’re going to be a horse, and you’re going to be a snake, and you’re going to be a Martian, and then we’re going to roll in on…” The conversation dissolves into laughter.

Things did begin to go a bit sideways for Cheap Trick around the time of 1985’s Standing on the Edge. On the surface, that disc was another solid collection of original tunes, highlighted by the hit “Tonight’s It’s You,” one of the best exemplars of the oft-maligned “power ballad” subgenre. But somewhat ominously, “song doctor” Mark Radice would be co-credited on 8 of the record’s ten tracks. Petersson says that Epic was pressuring the band to change their sound in a bid for greater commercial success (i.e. a hit). “It was like, ‘You guys are great, but boy, you’d be even better if you sounded like somebody else.’ Bringing song doctors … that’s not the way we think.”

Things went even farther afield on the next release, 1986’s The Doctor. Perhaps the least appreciated entry in the Cheap Trick catalog, The Doctor bore the fingerprints of a large cast of outside meddlers. For the band’s next release, 1988’s Lap of Luxury, even more song doctors got involved. And – fortunately or unfortunately, depending on how one looks at it – Cheap Trick scored a massive hit single. Petersson says that the label executives had told the band, “’Oh, if you want to get on the radio you’ve got to do this,’ and of course no one was ever correct about that. Except that once, they were correct. And if a label – or your manager, or whomever like that; somebody outside of the group – is correct about that sort of thing, you’re kind of screwed.”

“The Flame” reached #1 on the Billboard Hot 100 chart, also reaching the top spot on charts in Canada and Australia. “We didn’t mind doing it,” Petersson says. “We were trying all sorts of different things. We had a hit with ‘The Flame,’ which we didn’t like, but we didn’t dislike it.” He recalls that the song, written by a pair of British pop songwriters, was presented to the band near the end of sessions for Lap of Luxury. The band’s reaction was, “God, another thing we have to try?”

Petersson doesn’t mind so much that one of his band’s most well-known songs isn’t really representative of what Cheap Trick is about musically. “It’s funny how a lot of artists that I love, their biggest successes were by far their worst material.” He offers a ready example. “I mean, how great was Chuck Berry? But probably his biggest song was ‘My Ding-a-Ling.’” And another: “When I was a kid, my idol was Johnny Cash. ‘Walk The Line,’ ‘Ring Of Fire,” oh God … Johnny Cash at Folsom Prison. And then: ‘A Boy Named Sue.’ Ahh … no!”

But whether it’s “A Boy Named Sue” or “The Flame,” a hit is a hit. “That was all well and good,” Petersson says, “but then it became the search for ‘The Flame’ junior. And that did not pan out.” The band’s fortunes hit a slide. “So then we did one more record with [Epic parent company] Sony, we signed with Warner Brothers and then everything went to hell at Warner Brothers,” Petersson says. “Everybody got fired, and we went too.”

Finding themselves without a label presented an opportunity of its own, Petersson believes. “We were left to our own devices to do what we actually do, which is just make records for our own enjoyment.” In 1997 the band released its 12th studio album, the second of the band’s records to be titled Cheap Trick. For fans who had followed along since the early days, Cheap Trick was a welcome return to form, with top-notch songwriting (nearly all done in-house). But shortly after the album’s release, distribution company Red Ant went bankrupt. Cheap Trick became hard to find (today it’s available only as a digital download).

“So many people say that’s their favorite record that we ever did,” Petersson says. He waxes philosophical about the band’s extended run of bad luck culminating in the virtual disappearance of the second Cheap Trick. “It was not successful, but so what? I mean, we liked it, and people that liked us liked it. Success is like a lottery: it can happen, but it’s probably not going to happen.” He offers some sage advice for aspiring rockers: “If you’re looking to make a living making music, then you might as well go into something more stable … like professional gambling.”

The guys in Cheap Trick have always viewed making music as something they do to please themselves. “Some people are good at knowing what people want to hear, sometimes,” Petersson says. He names industry mogul Clive Davis as an example. But in Cheap Trick’s case, Petersson isn’t even sure with whom the band would be competing, so to speak. “When we started we were competing with disco,” he recalls. “Then we were competing with punk, then it was new wave, then it was Nirvana and Soundgarden, and then it was – God knows, hair bands – and then it was …” He trails off, then returns, chuckling. “Now it’s, ‘Are we in competition with Beyoncé?’”

Cheap Trick’s 2016 album Bang, Zoom, Crazy … Hello was its first with Daxx Nielsen on drums, and the second with a title made of seemingly random words (the first was the 1996 4CD compilation of hits and rarities, Sex, America, Cheap Trick). While some listeners felt they could hear the sonic difference between Daxx and the departed Bun E. Carlos, Petersson says that as the other half of the band’s rhythm section, he didn’t have to make any changes to his playing to accommodate the younger Nielsen’s drumming style.

Petersson says that Daxx “has a perfect feel of it; he inspired me to do better stuff. He’s explosive, he’s exciting, he enjoys himself while he’s playing, he knows the songs backwards and forward, he can play them on guitar, piano, whatever. He’s a godsend; he just fits in perfectly.”

We’re All Right is the second Cheap Trick album to feature Daxx Nielsen, who by all accounts has settled in nicely. And to anyone who thinks Cheap Trick plans on slowing down, Petersson has news for you. “Scott Borchetta, head of our record label Big Machine said, ‘Look, I love your band; I want you to do an album a year.’ Fine with us,” Tom Petersson says. “So that’s what we’re doing.”