Time certainly does fly. It was 40 years ago last February that Cheap Trick released its self-titled debut album. While the Rockford, Illinois foursome’s sound – standing on the edge (so to speak) between hard rock and power pop – took some time to catch on with the record-buying public, the band eventually became a million-selling act and a popular concert draw.

Their breakthrough, of course, was Cheap Trick at Budokan, a record that had initially only been released in Japan to satisfy the band’s huge fan base in that small country. But when Cheap Trick’s domestic label (Epic Records) noticed how many imports were selling here at home, they released the album in the U.S.

Cheap Trick forged onward from there, and have had a career of ups and down (but, it should be emphasized, mostly ups). The original lineup – vocalist and occasional guitarist Robin Zander, guitarist Rick Nielsen, bassist Tom Petersson and drummer Bun E. Carlos – held together until 2010 when Carlos stopped touring with the band and – sort of – left (accounts differ, but the matter was apparently resolved legally in 2015). Yes, Tom Petersson did leave the band for the period 1980-87, but let’s not quibble. 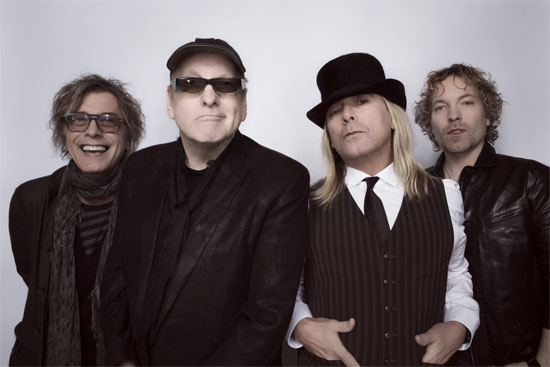 The group – with Nielsen’s son Daxx taking over on the drums – continues to tour heavily. In June, the band’s 17th studio release, We’re All Alright – a title phrase sure to register immediately in the minds of Cheap Trick fans – was released, preceded by the single “Long Time Coming.” On August 5, Cheap Trick played Charlotte’s PNC Music Pavilion as part of a three-act lineup that also featured Foreigner and Jason Bonham’s Led Zeppelin Experience.

Founding guitarist Mick Jones is the sole member of Foreigner from the years when Foreigner scored its hits; Bonham, of course, is the son of Led Zeppelin’s late drummer John Bonham. So with Foreigner you get 1/7 (or about 14%) of the band whose records you bought, and with Bonham you get the drummer’s son (don’t get me wrong: I’m sure both are fine bands who put on a great show). But with Cheap Trick, you get the guys who wrote all the songs (well, except “The Flame,” but we’ll get to that in a bit), and 75% of the band as it existed in September 1974.

And by ’74, the musicians in Cheap Trick were all seasoned rock ‘n’ roll veterans. “We’d been playing in clubs and playing in bands since 1964,” recalls Petersson. “It’s really all we did, all we knew how to do. We weren’t thinking, ‘Okay, now I’m going to go back to my lucrative dental career.’”

The band’s sound has changed in subtle ways over the years, but for the most part, when you hear a new Cheap Trick song for the first time, you’ll know it’s them. Petersson stands behind nearly all of the albums his band has released; each of them, he believes, represents where the band was at that moment in time. “Except our second album, In Color,” he cautions. “That did not represent us in any way. It had great material, but it was not us.”

Petersson explains what happened with that 1977 album produced by Tom Werman. The band had cut some demos, and when Werman heard them, he exclaimed, “This is the biggest bunch of shit I’ve ever heard! Here’s what you should do…” The bassist makes the point that the band doesn’t bad-rap much of its output, but privately they’ve never liked In Color. (For its part, the album earned rave reviews and Rolling Stone calls it one of the 500 greatest albums of all time).

The In Color experience remained enough of a sore point that the band went to the effort of recording a completely new version in 1998, with producer (oh, sorry: recorder) Steve Albini. While copies of those sessions leaked to (cough, cough) some fans, the remade In Color remains officially unreleased. “We didn’t finish it,” explains Petersson. We didn’t finish doing overdubs or vocals. It was time-consuming and expensive, and we didn’t have a label to cover [the expenses].” So will Cheap Trick ever release it? “I suppose we should eventually,” Petersson says. “But, y’know, why? We’re recording new music all the time, and that’s really what we look forward to. We’re not desperate to go back in time.”

Slightly more than two years after In Color‘s release, the U.S. release of Cheap Trick at Budokan hit domestic record store shelves. And it contained live versions of half the material from In Color, now sounding the way the band wanted the songs to sound. For most fans, those would become the definitive versions of those songs, a collection that includes “I Want You to Want Me” and “Clock Strikes Ten.” Petersson describes Cheap Trick at Budokan as “a greatest hits record.” Then he clarifies that assertion: “a live album is usually a collection of hits … which we didn’t have anywhere except in Japan.”

The band went on to great success from there; albums like 1979’s Dream Police are stone classics, and even the band’s slightly lesser-known releases – the George Martin-produced All Shook Up (1980), the Todd Rundgren-produced Next Position Please from 1983 (the latter with Jon Brant on bass) – are full of gems. Cheap Trick enjoyed working with a succession of producers. “It’s really an honor to work with people like that, and they’re great for all different kind of reasons,” says Petersson, who is reluctant to name a favorite.

Or, for that matter, a least-favorite. He does relate a quick story, though he won’t attribute the quote. “I had a producer say to me one time – and not even kiddingly – ‘God, this would be a great business if it wasn’t for the artists!’” Clearly the band has had the occasional unhappy studio experience, as evidenced by another Petersson anecdote.

“We will try a lot of things [in the studio], and sometimes you’re surprised,” Petersson says. “But a lot of times you’re not surprised, and it’s horrible. You’re like, ‘Okay, we’ll put the kibosh on it.’” But then the producer appears and says something like, “We’ll fix it in the mix.” Petersson laughs at the thought. “That’s always a good one; I’ve never seen that work out: ‘Don’t worry, it sounds like shit here. But when we get done with it, it’s going to be really good!’”

Admittedly, it’s tough to predict what fans will like. Petersson says that he and his band mates don’t possess any special insight on that score. “We may be like, ‘Oh, God I think this is one of our best songs.’ And then we’ll see a list of fan favorites, and it’s the least favorite song. What do we know?”

Everyone has his or her ideas on such subjects. And on more than one occasion Cheap Trick has been faced with outsiders suggesting career moves. “On our first album we were all four [pictured] on the album cover, and all on the back. And the label said, ‘You know, I don’t think people get it. This is too weird. Let’s put the two normal guys on the front, and the two nutty guys on the back.’” That was the strategy for In Color (and again for 1978’s Heaven Tonight, for that matter).