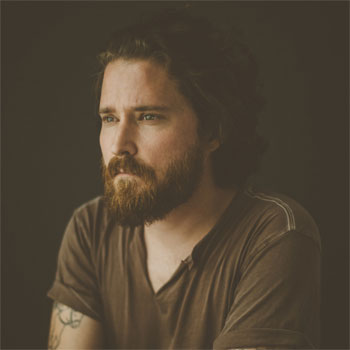 Christopher Paul Stelling is a singer-songwriter; he doesn’t include an ability to predict the future among his skills. Yet unlike some of the most respected pollsters, the seismic political changes that took place in the United States last November didn’t come as a surprise to him. The songs that he wrote as the future began to unfold are collected on Itinierant Arias, his fourth album. Stelling plays the Altamont Theatre May 27, his band’s first local show since returning to Asheville after nine years living in Brooklyn.

Stelling wrote obliquely topical songs like “Badguys” months before the election. “I turned in the finished record in September,” he says, “so I was writing it all throughout the year when I was touring.” He’s a bit surprised that the country’s turn toward a populist demagogue caught so many people unaware, and suggests that many Americans – himself included – tend to live their lives inside a “bubble.”

“If you live in Asheville you live in a bubble; if you live in New York City you live in a bubble,” says Stelling, who started his musical career in Asheville, relocated to Brooklyn, and has of late moved back to Western N.C. “But if you get outside of these isolated environments, you see what’s really going on.” He believes that his travels – taking him to places like Oklahoma, Ohio, “middle-of-nowhere Kansas” and Europe – opened his eyes to the concerns of a much wider sampling of people.

Stelling is wary of too much being made of his supposed prescience. “There’s always a press release that a [record] label writes to spark people’s interest,” he says, demonstrating a healthy awareness of how the music business operates. He doesn’t consider any of the observations within the songs on Itinerant Arias at all prophetic.

“The general denial with which we were approaching this … regime change, if you will, is pretty insane,” he says. Stelling’s busy touring schedule these last couple of years took him away from the telephone and Internet; instead he was “getting on the road, meeting actual people and talking.” Stelling says he connected with people in a casual way, without any kind of agenda.

Songs often grew out of Stelling’s experiences on the road, but not in a deliberate way. He says that he rarely sits down to write a song about a specific topic or idea. “It’s more like automatic writing,” he explains. “I usually figure out what [my songs] are all about afterwards.” While he doesn’t consider himself “mystical,” Stelling allows that he considers songwriting something of a spiritual practice, “even though I really regret using that word,” he adds with a laugh.

When he does sit down to work, songwriting isn’t usually on his mind. “90% of the time I’m sitting at the desk trying to book the shows and make the tours and order the t-shirts … and sustain actually being a working, blue-collar musician,” Stelling says.

“Maybe that’s not as romantic as people would want to hear,” Stelling says, “but [songwriting] is more the ‘magical’ element of it. The songs just kind of show up. I don’t consider that effort; that’s not hard for me. Thinking and pondering and being creative: that’s easy for me.”

For an artist who’s been getting some notices for his insight into where this country was headed, Christopher Paul Stelling seems remarkably content with the idea of embracing uncertainty. “That’s kind of my thing on the whole record,” he says. “That’s my faith at this point. You can drive yourself crazy trying to know.

“Everybody wants to know,” Stelling says. “And religion sells us on this. I really do believe that deep down they know they don’t know. But they’re selling us on the fact that they do.” Stelling chooses instead to accept “not knowing” with open arms. But not, he says, “in a way that’s [full of] angst or antagonistic; more in a way that’s freeing.”

Stelling savors the freedom he experiences as a touring musician who isn’t super-famous. “We have the benefit of really kind of knowing our audience and befriending our audience in a way that a star never could, you know? We’re accessible.”