Nearly everything about Asheville-based band Skunk Ruckus is suffused with humor. But the band is very serious about its music. The inherent tension between those two realities is part of the band’s recipe for success, as is the band’s musical style: equal parts punk and mountain music, delivered in cheeky style. Skunk Ruckus celebrated the release of Pearls Before Swine with a hometown show at Asheville, North Carolina’s Mothlight on May 11.

Back in the 1960s, pioneering freak-folk group Pearls Before Swine released a series of odd yet influential albums with titles like One Nation Underground. But Skunk Ruckus banjo player, vocalist and songwriter Jim McCarthy says that the title of the band’s second and latest album has nothing to do with that group. “Actually, it’s from Jesus’ Sermon on the Mount,” he says, quoting the scripture: “Do not give what is holy to the dogs; nor cast your pearls before swine, lest they trample them under their feet, and turn and tear you in pieces.”

Knowing where the story is headed, guitarist Dave Gilbert cautions, “Not sure that’s too cool to say in print; know what I’m sayin?” 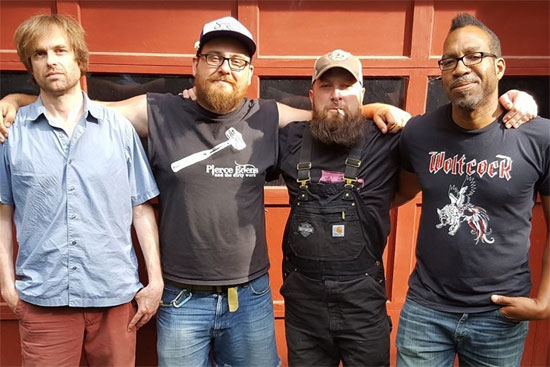 McCarthy chuckles and forges onward, undeterred. “We were playing a show and just kicking the crap out of it,” he says. And no one was responding. We might as well not have been there. And then Dave leaned over and said, ‘We are giving these guys gems!’ And I said, ‘Pearls before swine!’” It was all meant in good-natured fun, but the phrase stuck, and ended up as the album title.

Currently a four-piece (McCarthy and Gilbert plus bassist Max Steel and Ween drummer Claude Coleman Jr.), Skunk Ruckus originally came together around the core duo of McCarthy and Steel. Gilbert describes that duo’s sound as “old time ballads with electric bass.” Once he joined, Gilbert bonded with Steel over a shared appreciation for Fugazi and other Washington D.C.-based hardcore bands. “I figured, why not play a harmonic wall of noise over the banjo melodies?”

Gilbert notes that the band’s sound has developed since then, but notes with a smile that he sees his role as “thinking how to disrupt Jim’s thing as much as add to it.” Seemingly at odds with McCarthy’s musical mindset (“the more we morph or cross genres the more personally I keep attaching myself to an older and more traditional sound”), that push-and-pull is key to Skunk Ruckus’ overall sonic quality. “The bones are still the bass and banjo,” Steel says.

Pearls Before Swine was recorded at the Eagle Room in Weaverville with Matt Williams producing. The band blocked out a solid week for the marathon recording session and mixing. At one point toward the end, it looked like they would run out of time without finishing the vocal parts. “But I said, ‘I got this,” recalls McCarthy. “And then we knocked out six tracks in one day. That about killed me.” He reveals that Irish whiskey was a key to success. “The Jameson really helped with the hoarseness.”

The addition of Coleman on drums greatly expanded the group’s sound. Gilbert explains that when Skunk Ruckus was still a trio, McCarthy would “stomp on the kick-drum as he flayed the banjo and gut-sang. It was a great sound, but we wanted to be more of a rock band.” Gilbert says that Coleman’s skills as an arranger also helped sharpen the band’s musical approach. “Plus,” he adds, “he’s fun as hell to play with; he spurs on the jams.”

Skunk Ruckus’ musical hybrid style has earned them a solid fan base, but their irreverent take on the old-time musical aesthetic rankles some purists. “Traditionalists get a little antsy with us,” McCarthy admits. “Hell … even when I am playing old-time, they get antsy.” Steel jokes that “they tend to leave quickly,” then turns more serious and adds, “people truly appreciate our blend of genres.”

“We do our thing,” explains Gilbert. “Appalachian music isn’t frozen in the past, buried in amber in a museum or something. Appalachian music is alive today, and it responds to the living world that we all experience. We tell our stories.”