In recent months a bright spotlight has been shone upon multi-instrumentalist Billy Sherwood. The 51 year old, Las Vegas-born musician has had a long and prolific career of his own, releasing his original music and producing an array of other artists, primarily in progressive rock. But his long and fruitful association with some of the giants in prog has led him into two pivotal bass roles. He replaced the late Chris Squire in Yes beginning 7 August 2015 (Squire died in June of that year) and took over for John Wetton (who passed away 31 January) for Asia’s 2017 concert tour.

Sherwood knows those are big shoes to fill, but he tries not to over-think it. “I always tried to make my own way into Yes, as opposed to trying to replace anyone,” he says. He notes that he first joined the group as guitarist. “I was playing parts that I’d composed for songs I’d written, so I was making my own way into the picture.” 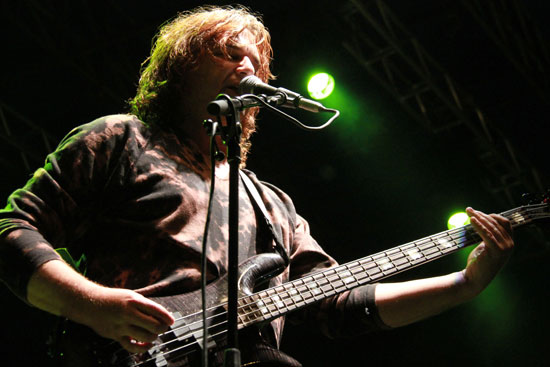 Yes has seemingly had a revolving door for its members; for example, keyboardist Rick Wakeman joined and quit no less than five times between 1971 and 2004. But founding band member Squire hand-picked Sherwood to replace him, and Sherwood had no misgivings about taking on the demanding assignment. “My relationship with Chris was such that the minute he asked, I said yes.” He laughs and admits that he would have agreed “if he asked me, ‘Can you come over and re-tile my kitchen?’”

Sherwood’s style on bass guitar is, after all, influenced more by Chris Squire than anyone else. “I grew up wanting to do what Chris did; that was my role model of things,” Sherwood says. “Playing with a pick, playing bright and loud and aggressive and lots of notes, and singing; that’s what I wanted to do.”

But Sherwood remains his own man when it comes to gear. He recalls that – in 2014 during Squire’s chemotherapy treatment – when first asked to fill in for the Yes bassist, he received a barrage of Facebook comments: “Oh, so you’re going to play a Rickenbacker?” He admits that the 4001 never felt right in his hands. He went to Squire and told him about the pressure he was getting from fans expecting him to use a Rickenbacker. “And Chris said, ‘That would be the stupidest thing to do. Don’t do it.’”

So he didn’t. Sherwood can quickly rattle off the details of his own live setup, in part because he has endorsement deals with all of the relevant manufacturers. “Spector basses, Line 6 pedal boards to create all the effects, Tech 21 amplifiers, and Rotosound strings.” He has a special affinity for one custom-made instrument. “Spector designed a couple of really unique basses for me,” he says. “One is a one-of-a-kind 8-string, and another is the ‘Fish’ bass. It has fish running up and down the scales, in honor of Chris.” He uses that setup for his live dates with Yes and Asia.

Sherwood notes that “Ritual,” from Side Four of Tales from Topographic Oceans, is one of his favorite Yes tunes to play; it was a centerpiece of the group’s 2016 and ’17 concert tours. “There’s a bass solo in there that’s pretty extensive,” he notes. He points out that while there are certain “iconic themes” in the song that are closely associated with Squire, “there are areas where I can play my own thing, and not worry about what Chris played.”

Beyond his bass playing with high-profile touring bands, Sherwood remains quite busy. He’s had a long relationship with Cleopatra Records and its associated labels, producing tribute albums (honoring Supertramp, Pink Floyd and others) and organizing all-star collective projects (The Prog Collective, The Fusion Syndicate).

Sherwood has known Cleopatra’s founder Brian Perera for many years. “He was and remains an ally in this business,” Sherwood says. “We’ve made a lot of records together, and the people at Cleopatra trust that I’m going to keep the quality high, maintain the highest musical integrity, and get the best people involved.” Fittingly enough – and bringing together all of his projects into one – Billy Sherwood’s current project for the label is a tribute to Chris Squire.

An edited version of this feature appeared in Bass Guitar (UK).