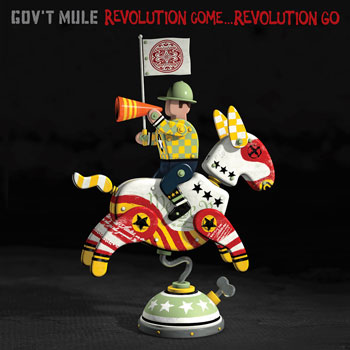 The early 1970s were a momentous time in the history of rock. Mighty men with loud guitars roamed the land, often leading groups of two or three other men. The best of that era’s bands crafted a sound that enjoyed widespread appeal, thanks to a balance of hard-as-nails beats, thunderous bottom-end, and highly appealing guitar riffage. Equally importantly, they had good songs.

In short, they balanced simple and straightforward rocking with a quality one might almost describe as subtlety. Groups like the James Gang, led by future Eagles guitarist Joe Walsh, wrote songs that simultaneously sounded like hit singles and felt like deep album cuts. Listening to tunes like “Walk Away,” “Midnight Man” and of course “Funk #49” can be an exercise in nostalgia, but the music holds up surprisingly well; the timeless quality of the James Gang’s catalog can still provide joy to the modern-day listener.

Asheville native Warren Haynes is clearly a student of that era’s music. Though the sounds he makes with his band Gov’t Mule aren’t retreads of songs from the past, there’s a deeply knowing sensibility within the grooves of tunes like “Stone Cold Rage” – the opening cut on Revolution Come…Revolution Go – that reminds listeners that Haynes learned long ago all the right lessons about how to rock.

When rock guitarists first discovered the wah-wah pedal, most of them did what pop musicians always do with something new: they overused the effect, wringing what seemed like every bit of nuance right out of the thing. But Haynes still has one in his musical arsenal, and he’s skilled at using the pedal as a subtle tool of expression.

“Drawn That Way” builds upon a blues foundation, but in the hands of Gov’t Mule, the form steers clear of the by-the-numbers character endemic to so much of today’s by-the-numbers boogie blooze. Listeners who want compact memorable tunes but still expect wailing, extended guitar solos will find that Haynes has discovered the secret to having it both ways.

On his most recent solo outing (2015’s Ashes & Dust) Haynes explored the singer-songwriter, Americana side of his musical personality. Now back with his regular band for its first studio set of new material since 2013, he’s free to unleash his more rocking tendencies. And those qualities are in full flower throughout Revolution Come…Revolution Go, a consistently hard-charging outing.

Gov’t Mule is frequently pegged as a southern rock band, and there’s no escaping that label. And in concert Gov’t Mule lives up to the jam-band label as well. But in the studio, Haynes and his band mates (bassist Jorgen Carlsson, drummer Matt Abts and keyboardist Danny Louis) craft songs and arrangements that draw from the best of the freewheeling jam aesthetic, distilling those qualities into relatively compact tunes that only occasionally exceed the seven-minute mark.

With Revolution Come…Revolution Go, Gov’t Mule captures what was valuable and enduring about hard rock of the early ’70s, and recasts it into something timeless. The band’s sturdy songwriting – by Haynes on his own and with the rest of the band – showcases succinct and memorable melodies that establish the basis for further onstage exploration.

Gov’t Mule’s catalog is filled with live releases that document the band’s versatility in concert. The band’s studio albums are of a slightly different character, displaying a more focused side of the band. And while Revolution Come…Revolution Go is indeed a studio release, it goes a long way toward reconciling the differences between live and studio, resulting in one of the band’s finest albums to date.