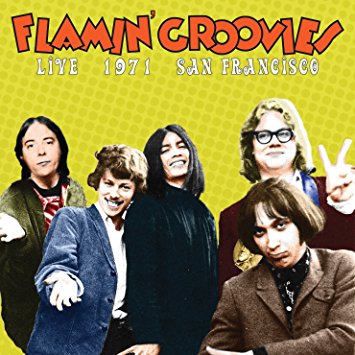 One could be forgiven for thinking that the Flamin’ Groovies visited our planet from another time and or/dimension. Their music has been resolutely out of step with prevailing trends. Which isn’t to say it’s not great: tracks like “Teenage Head” are classics of the garage rock subgenre, and “Shake Some Action” is an exemplar of power pop. Beyond critical plaudits, the group never got its due. Constantly shifting personnel (more than 20 musicians have passed through its ranks), poor distribution and nonexistent marketing meant that – then as now – the average music Consuelo never heard of the San Francisco-based group.

It doesn’t help when you go five years between album releases, either, as the band did with 1971’s Teenage Head and 1976’s Shake Some Action (hey, at least they had the foresight to title their albums after the best songs). But as you might have noticed from the info I’ve provided, there wasn’t a huge demand for garage rock in 1971.

That year, a seminal (or near-seminal) lineup of the band played to a hometown crowd at Bill Graham’s Fillmore West. For that show, the band’ s set list was essentially a tribute to its heroes: The Who are covered twice (I Can’t Explain” and a cover-of-a-cover of “Shakin’ All Over”) and they play “Louie Louie” by the Kingsmen (or, if you like, Paul Revere and the Raiders). A few tunes associated with the Groovies do crop up (“Slow Death,” “Teenage Head”) as well.

But nearly all of that is rendered moot by the sound. The audio quality on Live 1971 San Francisco sounds like it was made on cheap, consumer portable recorder, stuck inside a paper bag that was then stuffed inside a canvas backpack. And then, perhaps, the resulting tape was stored in someone’s attic for 45 years. Wow and flutter, tape hiss, jumps in volume and execrable balance are just some of the defining qualities of this recording.

I write this as someone who spent the better part of two decades amassing a collection of bootleg recordings: Live 1971 San Francisco borders on the unlistenable. (It does either improve as it goes along, or perhaps my ears just acclimated to the “quality.”) But as with most releases of its type, the disc earns a few points for value in other areas. First, it documents the final concert at Graham’s venue before its closing; form a purely historical standpoint, that’s something. Second, it’s one of exceedingly few live recordings of prime-era Flamin’ Groovies. Judged with those realities factored in, it would merit one star (if I did the one-to-five-stars thing). Otherwise not. If you can abide what’s clearly a bootleg recording, and you appreciate the Flamin’ Groovies, consider checking out this disc. But please consider my warnings well.