Album Review: Emerson Lake and Palmer – Once Upon a Time in South America 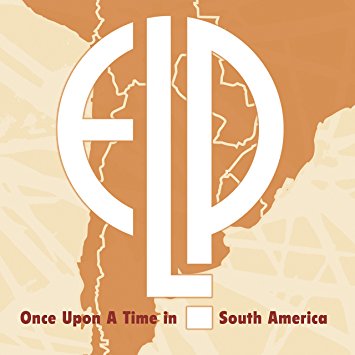 By the early- to mid-1990s, ELP had seen its share of ups and downs. The band that had created some of the most compelling progressive (and often classical-leaning) rock of the 1970s had fallen victim not only to changing tastes, but – it must be said – to the vicissitudes of a post-creative-peak world. After 1978’s poorly-received Love Beach – an album that (while no classic) is nowhere as dire as its reputation would have you believe – Emerson Lake and Palmer went on an extended hiatus. Each of the three men busied himself with other projects.

In 1985, keyboard virtuoso Keith Emerson and guitarist/bassist/vocalist Greg Lake reunited, and found a drummer who was not only superb, but had a surname that began with the letter P. Emerson Lake & Powell released but one (self-titled) record, and it was pretty good for what it was. But – though the success of Asia might have suggested otherwise – there was no great market demand for ELP’s brand of progressive rock in the mid 1980s.

By 1993 ELP was back together, having released the not-bad Black Moon the year previous. In ’93 the trio released a live album, Live at the Royal Albert Hall, which (predictably) was better, as it drew from the band’s entire catalog. The release schedule would continue apace with 1994’s retrospective box set, The Return of the Manticore; the 4CD set was not wholly unlike King Crimson’s The Great Deceiver box from 1992: a collection of live material, new and old, brought together to create a compelling if disjointed whole.

Also in 1994, ELP would release what would be its final collection of new music, In the Hot Seat. Sadly, it’s widely considered the trio’s poorest album. Countless live albums – sourced from concerts new and old – would follow in its wake. And by “countless,” here I mean “more than a dozen.” The band’s final concert took place in 2010. While all three remained active to various degrees, any hope for a reunion ended in 2016 with the deaths of both Keith Emerson and Greg Lake.

It’s against this backdrop that the sprawling 4CD set Once Upon a Time in South America is inevitably judged. And in that light, the verdict is not flattering. The set documents three concerts in full: two from April 1993 (Santiago, Chile and Buenos Aires, Argentina) and one from 1997 (Rio de Janeiro, Brazil). While the performances are good – not superb, not bad in any particular way – the audio quality is on the shrill and tinny side. Likely made for broadcast as opposed to general release, the recordings are of passable quality for their originally-intended purpose, but by any other standard, they’re subpar.

Add to that the rhetorical question: does the world need three more live versions of Mussorgsky’s “Pictures at an Exhibition”? Or three readings of the Emerson Lake & Powell-era “Touch and Go”? Or three essentially identical versions of “Tarkus”?

The set is not without its virtues: near the end of the Rio set, ELP turns in a song that it had actually rehearsed in its earliest days together, King Crimson’s “21st Century Schizoid Man.” The original, of course, featured Greg Lake on vocals. And the medley of Aaron Copland’s “Fanfare for the Common Man,” Leonard Bernstein’s “America” and Dave Brubeck’s “Rondo” is impressive. (Both versions, in fact. But … still.)

On one level, housing these three concerts in a single package makes a kind of sense: with so many other ELP live collections out there – many of which are vastly superior – without a doubt the market for Once Upon a Time in South America is the completist fan. For him (or in rare cases, her), a single purchase is probably cheaper and easier than three separate transactions. But beyond that, this set defines redundancy. It’s really intended only for the Emerson Lake and Palmer Fan who simply must have it all.