Album Review: Laura Blackley and the Wildflowers — Tell it to the Darkness 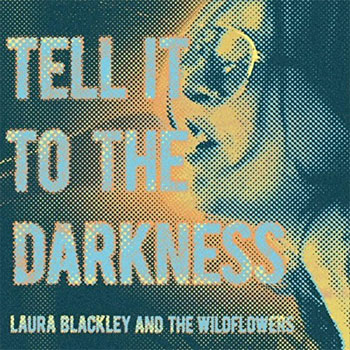 An engaging Southern gothic troubadour, Laura Blackley is a beloved fixture on the regional live concert circuit. On Tell It to the Darkness, her well-honed strengths are on prominent display. Chief among her assets is a skill at crafting thoughtful lyrics — word pictures, really — that work as well on the printed page as they do within the context of songs.

The tasteful yet energetic musical backing throughout the album is reminiscent of classic country: judicious use of pedal steel and shimmering electric guitar; warm and inviting acoustic guitar; and a rock-solid rhythm section. But Blackley’s lyrics are the centerpiece of Tell It to the Darkness.

Most notable among the album’s 11 tracks is “Good Night Orlando,” a tribute to the victims of the tragic June 2016 attack on the Pulse nightclub that took the lives of 49 people. Rather than chronicling the events of that day,  Blackley focuses on a slim glimmer of optimism as she repeats the refrain, “Love is all we ever have.”

As assured a vocalist as Blackley is, when she harmonizes — as on “Miss Nina” — she’s even more effective. And when she turns in a more rocking direction on “Mama Don’t Cry,” Blackley demonstrates that her songwriting mastery need not be contained strictly to country. Lyrics like “You don’t have the luxury to self-destruct / ’cause girl you got a baby to raise” will ring true to listeners, parents or not. “Black Mountain Sugar Babe” showcases Blackley’s facility at suffusing country-blues with humor (not to mention Andrew Scotchie’s tasty slide guitar solo).

The sole cover on Tell It to the Darkness is a reading of “No Expectations,” a deep cut off the Rolling Stones’ 1968 LP Beggars Banquet. Blackley makes the tune her own; unsuspecting listeners won’t even know it’s not an original.