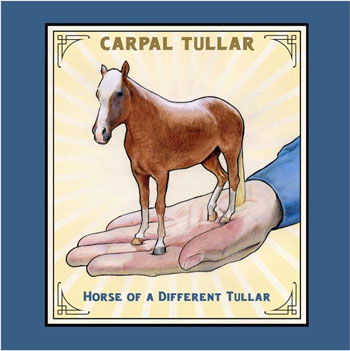 Carpal Tullar is an arty rock trio based in Asheville, N.C.; the band plays local dates occasionally. But Carpal Tullar is also a studio project that’s essentially the work of one man, Chris Tullar. Carpal Tullar (the project) has made four albums; the first of those, The Milquetoast Manual, was released in 2007. The latest fruit of Tullar’s labors is Horse of a Different Tullar.

Under the “Recommended if you Like” heading on CD Baby’s page for Carpal Tullar are some familiar names: They Might Be Giants, Ween, the Beatles. Those names – in that order – will suggest that Carpal Tullar’s music serves up equal parts impossibly hooky music and some decidedly angular and left-field musical twists and turns.

And that’s about right. After the brief introduction of “Enter to Win,” the disc segues into “Stay the Hand.” Aficionados of early- to mid-1970s progressive rock might detect the influence of Todd Rundgren’s seven-man Utopia. But just about the time that reference registers in the listener’s mind, the song shifts gears into a catchy, almost power pop vein. And that might remind some of Rundgren’s later, streamlined, four-man Utopia. And as the disc unfolds, Tullar’s appreciation (and close study) of Brian Wilson’s vocal arrangements is made manifest.

It’s a high-wire act to craft tunes that are both musically challenging and yet accessible. Tullar pulls it off with songs like “My Iron Lung.” No, it’s not the early (1994) Radiohead track; Carpal Tullar’s “My Iron Lung” is a pop ditty that feels like Sell Out-era Who with a bit of “Tommy’s Holiday Camp” tossed in for good (and odd) measure. But the song’s second half seems flown in from a wholly separate universe, one in which artists like Elton John craft perfect pop.

Tullar isn’t afraid to get weird: “What I Eat May Kill Me Young” suggests what Frank Zappa might have sounded like if he had pursued a pop career, or perhaps a sideline writing themes for television sitcoms. A tidy corkscrew guitar solo steers the tympani-centered song into more conventional musical territory. “Lava La Ropa” is quirky, too, and represents the only track on which Carpal Tullar sounds explicitly like another act (in this case, They Might Be Giants, albeit with a Latin spin).

The dozen songs on Horse of a Different Tullar tumble seamlessly into one another; the combined effect is – or at least feels like – a song cycle, or a thematically-linked suite of songs. You know, like they used to make back in the 1970s. Tullar – who plays and sings everything on the disc save a bit of pedal steel guitar on one track, the album encore track perversely titled “We Don’t Play Encores” – is possessed of a seemingly bottomless well of ear-candy melodic ideas.

And they’re all executed skillfully; Tullar’s song ideas don’t call attention to themselves; instead his restless creativity is subtly expressed within the context of appealing, memorable melodies. The adventurousness is there for those listeners who decide to embrace it; everyone else can just dig the tunes. Tullar’s sense of humor bubbles up all over the place, most often in the context of songs with incongruous titles like “Fake My Death.”

If there’s a “single” to be found on Horse of a Different Tullar, it’s a wonderful, speedy little ditty called “The Sniper.” In addition to sporting a melodic line other writers would kill for, the song features some self-aware humor in its lyrics: “I stumble through the chorus and I hide the verse.” That brief line seems a happy admission that Tullar feels some built-in tension between his ambitious ideas and his predilection for penning a tune that sticks in the listener’s head.

Here’s hoping he never resolves that conflict; like the abrasiveness of sand is an integral part of the creation of a pearl, so too is the internal struggle between Chris Tullar’s progressive and pop sensibilities. And Carpal Tullar’s Horse of a Different Tullar showcases those qualities in the best possible way.