A pioneer in electronic music, French composer-performer Jean-Michel Jarre is as well-known for his stage spectaculars as for his innovations in ambient and new age music. Though he has always embraced new technology – from his earliest projects, his musical tools included synthesizers and drum machines – he remains wary of some of the uses to which technology can be applied.

Jarre’s breakthrough album was 1976’s Oxygène; it was a massive success in his native France as well as the UK, and did reasonably well on the U.S. charts (#78). While he would go on to release nearly 20 more albums over the following decades, the musical concepts and themes of Oxygène would continue to inspire him. Jarre released a sequel (Oxygène 2) in 1997, and the third installment in the trilogy in 2016. Oxygène 3 represents a modern technology take on Jarre’s original minimalist ideas. 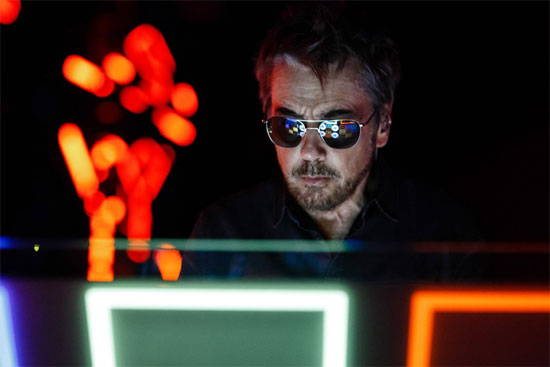 Unlike many artists of his generation – Jarre is 68 – he doesn’t shy away from modern-day musical innovations. “For quite a long time I had been convinced that the analog way of recording was higher and better than the digital,” he explains. He refers to the 1990s and early ’00s as “the dark ages of digital.” But he is convinced that music technology has improved immeasurably in recent years. “I have an emotional relationship with Ableton Live like I used to have with the 24-track studio,” Jarre says. “It’s easy and quick, and I can get the warmth I want to have.”

Jarre views the rise of high quality digital audio as a democratizing development in music. “Before, you needed a big console, big desks; you needed quite very expensive equipment,” he says. “Today you can do decent production with a more minimalist budget.” And Jarre has little use for the argument that low-cost technology puts tools in the hands of people who lack the creativity to make good music, flooding the market with substandard product. “That reminds me of the Vatican fighting Gutenberg when he invented the printing system,” he says. “They were afraid that suddenly everybody would have knowledge, and they would not have the monopoly anymore. It’s the same with music.”

Jarre’s latest studio project, Electronica, would not have been possible without software tools, he says. “20 years ago, it would have been probably too expensive, and taken too long.” Even with modern technology, Electronica took five years to complete; Jarre journeyed the world to collaborate directly with other artists. “I traveled everywhere: Germany to work with Boys Noize; the U.K. to work with Massive Attack, Pet Shop Boys and Pete Townsend; Los Angeles to work with Hans Zimmer and Moby; New York with Laurie Anderson, Cyndi Lauper and Vince Clarke from Depeche Mode.” Jarre describes Electronica as “merging musical DNA, face-to-face.”

There are – or should be – limits to the reach of technology, Jarre believes. That idea is the central theme of “Exit,” one of Electronica‘s standout tracks. Addressing the idea that with the rise of the internet, consumers have in fact become the product, “Exit” features” a spoken section by exiled whistleblower Edward Snowden. “I’ve been really moved and impressed by his courage,” says Jarre, who considers Snowden a modern hero. “I wanted to collaborate with him because one of the recurring theme of my Electronica project is this kind of ambiguous relationship we have toward technology.”

Jarre has long been inspired by those who stood up to massive, powerful forces. His mother was a key figure in the French Resistance during World War II. “She always told me that when the power in place is generating ideas or facts which may harm the community, some of us should set up against it and should resist,” he says. “Exit” is also a centerpiece of Jarre’s current U.S. tour, one which promises to adhere to his high standards of multimedia presentation. The live shows will present Jarre’s big themes while providing a dazzling audiovisual spectacle. “I don’t think it’s too late” to address the privacy concerns posed by technology, Jarre says. “Awareness always leads to action.”