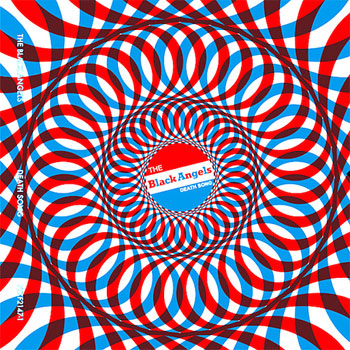 The Black Angels have never been what one would call a commercially-minded group. That said, a few years back Alex told me that “Telephone” off Phosphene Dream was a conscious attempt to reach a wider audience. Would you agree, and if so, to what degree was that successful?

Yeah, I guess so. I remember we recorded that in Los Angeles at Sunset Sound. Wee were all staying in a house together and I ordered a Rickenbacker 12 string. It was delivered to our house and right when I started playing it, that riff just came out. It was as if it was in the guitar and just needed to be let out. But the original way that that song sounded was slow; then when we went in and Dave Sardy started to produce, he was like, “I wanna speed it up!” Y’know, I prefer things slow and molasses-y. But he sped it up, and that did make it more poppy. It’s funny: it’s so poppy that it’s my parents’ favorite song. And we’re not going in that direction.

Way back in 2008 you guys worked with the 13th Floor Elevators’ Roky Erickson. At that time there were persistent rumors of an impending studio release, but nothing really materialized beyond the single “ Thank God For Civilization.” When I interviewed Alex Maas in 2014, he told me that he still had hopes of releasing more from the sessions you did with Roky. Can you tell me a little bit about why it didn’t work out?

We were given demos of Roky’s songs, and we chose our favorite ones. We recorded about 11 of his songs. We did all the music to those songs; that’s done. And our thought was that Roky would come in and sing on them, but he didn’t really remember the songs. We had done “Thank God…” and we did another song called “Bo Diddley is a Headhunter” …

Right, the B side of the single …

Yeah. And Roky had a hard time even just singing “Bo Diddley is a Headhunter.” And that’s the only line in the song. It just seemed like it was going to be too hard of a process for him to remember our songs. Later, this other band Okkervil River ended up recording some stuff with him; I’m not sure why they decided to go down that path instead of a path with the Black Angels. We were really hoping to make it like 13th Floor Elevators record; we were going to have an electric jug on it. We might put that stuff out sometime on our own.

I’ve done this sometimes: I’ll record a song in an hour; it just comes out of me, and I won’t really remember how to play it a month later. So I’m sure he just had a burst of creativity, came up with a song and recorded it. And maybe that’s the only time he ever played it.

When I last spoke with Alex, the band was still relying as much as possible on vintage gear for live shows. Vox Continental and Jaguar combo organs; that kind of thing. Is that still true, and how important is that to the band’s aesthetic do you think?

Yeah, we still do. And I think it’s very important. In my opinion, that old gear sounds better; most of it was hand-wired, and there’s more of a human element to it. Newer things are made in a factory, and the quality is poor. Most all of our stuff is old, but we combine old with new; that’s the whole idea of the Black Angels, of course. Our favorite genre of music is sixties rock and roll; we use that kind of gear but bring it into the modern era.

Your album credits sometimes list an instrument called a “drone machine.” What exactly is that: a modified Farfisa or Rheem keyboard? Or is it something else?

That’s something we just made up!

You and Alex are prime movers of the Reverberation Appreciation Society which created the Austin Psych Fest, now called Levitation. When you began that endeavor, did you ever expect it to expand and become as successful as it has been?

And it’s moved to other cities as well; there’s one in France …

Yeah, so it’s in France, Chicago and Vancouver. Now we’re trying to expand it into other cities. Australia may be the next move. But you know, we have to get it under control in Austin first, after last year’s debacle. Because of the weather, we had to cancel everything. And we had to take a year off.

You’re involved in events at this year’s South by Southwest. I’m reading more and more about long-time attendees deciding to quit going, because they say it has gotten so big and lost some of its original identity. And people always seem to remark about the giant Doritos vending machine stage as a symptom of where things had been heading. What are your thoughts on SXSW overall?

South By Southwest is kind of what helped to get us seen, so we started something back in 2005 and that’s how we got connected with our first label, Light in the Attic Records. So SXSW worked its magic for us. But now it’s out of control; it’s crazy. There are just so many, so many people around now; it’s just way, way, way bigger than it was when we first started. And it’s become very corporate now where it used to be kind of local and off-scene. It has definitely had a corporate takeover.

It’s still a fun time now – it’s the beginning of Spring – but it can be very stressful. We used to play three times a day at SXSW; we were able to drive across town and do that. But it’s just impossible now. You can’t drive anywhere downtown now; they block the streets off. It’s just madness.

So how have you managed to keep Levitation from falling into the corporate trap while growing it?

That’s a fine line that we have to walk. I feel like we did a pretty good job with that, we mainly had local sponsors. We did have some corporate beer companies. Our main thing is that we always wanted to have full control of the aesthetics of the festival, and be able to book the bands that we wanted to book, do all the art. So that’s one reason why we’re having to take a year off, because of the financial trouble that we got in because of having to cancel the festival. Now, if we were to have big corporate sponsors, then that might not have been a problem. But moving forward, we want to keep it as within our group as possible, and not sell out to whomever. We want sponsors that line up with our views and values for our festival.

Yeah, Doritos would be a great brand! Pringles, maybe. [Laughter]