Up Close and Personal with The Damned’s Captain Sensible

Among the most irreverently good-natured bands to come out of the mid 1970s London punk rock scene, the Damned made their indelible mark on music with their debut album, 1977’s Damned Damned Damned. Newly reissued to commemorate the 40th anniversary of its release, that record has an immediacy that sounds as fresh today as it did then.

Though they’d go on to release ten studio albums (another’s on the way later this year), countless live discs and a raft of singles and EPs, it was the Damned’s first album that spawned two of its best-loved tunes. “Neat Neat Neat” and “New Rose” captured the zeitgeist of the punk era, and did so with a sense of fun that some of the band’s contemporaries – the Clash, to cite the readiest example – often lacked. 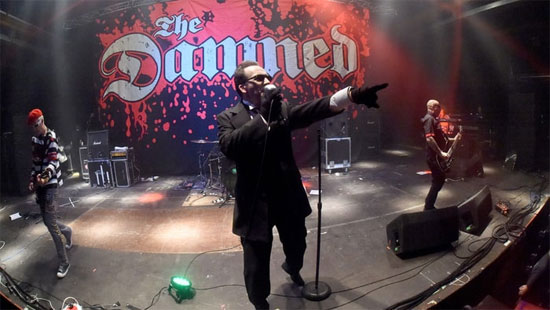 The band never went in for stadium-sized guitar heroics; the Damned have always been about an up close and personal good time. “Who wants to see a band of stick insects in the far distance?” asks Captain Sensible (born Ray Burns), the Damned’s original bassist (long since turned guitarist). Agreeing with the accepted wisdom that punk was a reaction against massive stadium acts, Sensible still adheres to that ethos. “The closer you are to the action, the better,” he says.

“Sometimes our audience are right up against the stage,” he chuckles. “I love playing games with the front row.” He offers examples of said games: “Stepping ‘accidentally’ on their hands. Getting a bit of banter going. Gigs should have an element of chaos and unpredictability,” he insists. “I see that as my job.”

That playful attitude has been a mainstay of the Damned’s attitude toward the music, the industry, its fans, and everything else. And sometimes there was a practical benefit to their devil-may-care approach. Sensible recalls an early strategem for getting gigs. “We had to lie about the nature of the band,” he says. “I’d look over the manager’s shoulder, at the posters on the wall. Whatever kind of bands were there, that was the sort of music we played! Blues, folk, reggae … it got us gigs.”

But once the Damned showed up, club managers often began to get suspicious. Few reggae or folk bands featured a lead singer (Dave Vanian) who looked like he stepped out of a vampire film, or a drummer called Rat Scabies, or the sartorially distinctive look favored by Captain Sensible. Even if the band’s grab-bag look didn’t give things away, “they soon found out the truth when we started playing,” says Sensible. “We had a few curtains pulled on us!”

Over the years, the Damned’s lineup has changed. Famous (or so they’d have us believe) for being the first of the era’s punk bands to break up and reunite, the Damned has seen more than a dozen members pass through its ranks (that doesn’t even count the six or so touring or studio session members). Only Vanian and Sensible remain from the band’s earliest lineup, though the other three current members (keyboardist Monty Oxymoron, drummer Pinch and Stu West on bass) have all been with the band for well over a decade. But thorough the changes, the band’s musical outlook – punk mixed with garage and psychedelic influences – has remained rather consistent.

Sensible recalls how founding guitarist Brian James started the Damned in 1976. “He put the band together through ads in music papers. He wanted a band that played aggressive music.” He certainly got that with the band’s original lineup. “But even he was fed up after two years of working with Rat Scabies and myself,” laughs Sensible. He says that for him and the drummer in those days, “it was all one mad party. We were thrown out of hotels on a regular basis – often in the early hours of the morning – owing to pranks or fighting.” He makes the point – one that scarcely needs voicing – that his stage name is ironic.

Forty years’ time has mellowed the band members just a bit. Touring the U.S. back in the ’70s, Sensible made sure to pack as much British beer in his suitcase as possible. “The thought of even a sip of Coors, Miller, Bud or Schlitz scared the bejeezus out of me,” he says. Today at age 63, things are different for Sensible. “I generally find myself online, researching the brew pubs for lunch and a pint in the next day’s city,” he says. “That’s fun.”

And rather than engaging in motel mayhem between gigs, today Sensible is more likely to be found on a city bus somewhere in America. Remarking on the vastness of the United States – something the band is witnessing firsthand on its current 35-date tour – Sensible says that in his spare time he likes to get out and explore, preferring to “travel like the locals on the bus or tram, or whatever urban transport is on offer. Buy a day pass and have a random wander. You can end up in some funny old places,” he observes, “not all of them advisable!”

Once the tour wraps, the Damned will finish and release their crowd-funded new album, a followup to 2008’s studio release, So, Who’s Paranoid? Asked to describe the as-yet-untitled album, Sensible hedges slightly. “Each album we’ve made sounds different from the last one, and this one will continue that trend. There will be some surprises, but plenty of energy and melodic content too.” He pauses and then adds, “Oh, and some darkness too.”