Note: I recently had the pleasure of interviewing not one but two members of the Damned. Here’s Dave Vanian; tomorrow it’s Captain Sensible. — bk

The Damned were part of British punk rock’s so-called “class of ’77,” a group that included the Sex Pistols, the Clash, the Buzzcocks, the Stranglers and select other bands. But in many ways, the Damned stood out from the pack. Shel Talmy – producer of celebrated tracks by the Who, the Kinks and others – chose to work with the group on a single, “Stretcher Case Baby,” because he saw them as different from other punk acts of the day: they could actually play their instruments, he said. 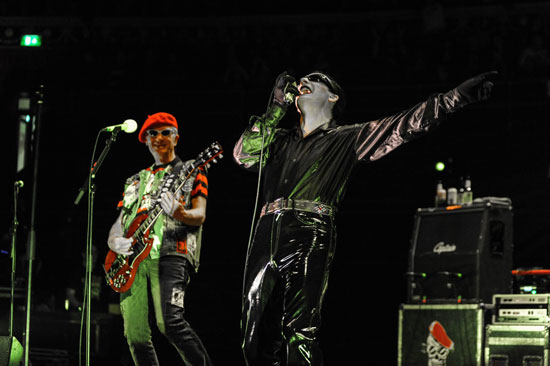 “I think he’s absolutely right in saying that,” says Damned vocalist Dave Vanian. Even though Vanian didn’t (and doesn’t) play an instrument onstage with the Damned – who are on tour in the U.S. through most of May – he recognizes Talmy’s point, and holds great respect for the producer, even though Talmy produced only two songs for the band. “Obviously, there were things he’d done years before that we really liked,” Vanian says. The producer and band only spent a few days together in the studio, “but it went really well,” says Vanian. “Shel was great to work with.”

Beyond Talmy’s skills behind the recording console, there was something special for the Damned in getting to work with a producer who helped create some of the greatest tracks of the 1960s. Fellow punks the Clash may have sloganeered “No Beatles or Rolling Stones in 1977!” but the Damned were unapologetic for their love of the rockers who preceded them.

Vanian thinks of that time in ’77 when his group worked with Talmy as a kind of gateway. “It wasn’t opened for very long, but the two worlds were kind of meshed together,” he says. “Back then, sometimes you got to work with people who were from a completely another time.” But Vanian also notes that some things had changed very little for rock musicians in the years between the 60s and mid 1970s, or even over a longer period.

“Back in those days, we’d be on the road and we might would run into Gene Vincent’s backing band on the way home from a show,” Vanian recalls. “Bands you wouldn’t expect to see.” He remembers some of the conversations he and his young Damned band mates would share with those veteran rockers. In a late-night truck stop over a steaming hot cup of tea, the older musicians would tell their tales of “the same bad luck and bad management; the same kind of thing we’d be going through,” says Vanian. “So nothing had changed.”

Vanian laughs ruefully as he characterizes the music business of the 1970s. “Managers were ripping off bands, and A&E (Artists and Repertoire) people were on ridiculous, paid-for lifestyles,” he chuckles. “There were an awful lot of people who knew nothing about music at all; they were just using it as a party time.”

The Damned certainly did their share of parting, but they managed to create an impressive body of work in the process. Their debut single, 1976’s “New Rose” is a punk classic, and actually charted in the UK (#81), something that many classics songs of that era failed to do. And their first album, 1977’s Damned Damned Damned – newly reissued to commemorate the 40th anniversary of its release – has worn better than many albums of its era; there’s an immediacy and exuberance in the record’s dozen tracks.

Part of Damned Damned Damned‘s enduring and fresh quality may have to do with the group’s largely apolitical musical persona, another characteristic that set the band apart from the Clash and Sex Pistols. Vanian explains that the original lineup – he and bassist Captain Sensible plus guitarist Brian James and drummer Rat Scabies – “had no political issues whatsoever; the band just wanted to be a band.” He says that the guys in the group had struggled fairly hard in life, and jumped at the chance to play music.

Vanian notes that when the Damned achieved some measure of success, there still wasn’t really a widely-recognized label on what was happening. “There was a real buzz and excitement in London,” he recalls. “Things were changing. But no one had claimed a name for it or named it as a musical movement. The press built all that up, as they always do.” But the Damned knew they were part of something exciting.

“The beauty of it was that all the bands were totally different from each other,” Vanian says. “And it didn’t all look the same.” The Damned certainly had a distinctive look all their own: Vanian – allegedly a former gravedigger – struck a proto-goth pose; Sensible, who would eventually move over to guitar, had a sense of style all his own with his beret and striped shirts. But then as now, the ever-raucous group kept the focus on the music. Though he’s no nostalgia merchant, Vanian has fond memories of playing live 40 years ago. “It felt to me much how it must have felt for the Beatles in the very early days back in Liverpool,” he says. “Or when you had the Doors and bands like that playing three sets a night.”

Vanian, Sensible and the other current members of the Damned are clearly thrilled to be touring, and the band has a new album due out soon. Asked how touring in 2017 compares to the glory days of 1977, Vanian chuckles. “The glamour doesn’t get any better; I’ll tell you that. Surprisingly, it’s pretty much the same … except I’m a lot older.”