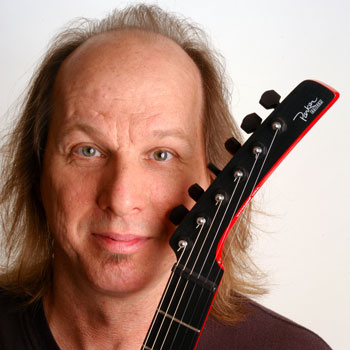 Guitarist Adrian Belew has had a long and staggeringly impressive career. With one foot in the progressive world and the other firmly planted in mainstream pop, he’s played and toured extensively with David Bowie, Frank Zappa, Talking Heads, Nine Inch Nails and many others. He was guitarist and primary vocalist for rock legends King Crimson for 33 years.

In recent years Belew has scaled back his involvement in the projects of other artists. “Ever since I created Flux about five or six years ago, I’ve found myself more productive and creative than ever,” he says. “And I have really decided to spend as much time possible on things of my own creation.”

At present Belew is touring the world with his Power Trio, featuring longtime associates Julie Slick (bass) and drummer Tobias Ralph. Playing live in a trio format affords Belew some musical opportunities he doesn’t find as easily elsewhere. “It puts me in a position to go fairly freely with guitar playing,” he says. “It gives me a larger role as a guitarist.”

Belew explains how the Power Trio’s music works in a live context. “What I do often is make a loop that the trio can play to, and then fly above it,” he says. “So there is that part. The other part is whenever we take material that wasn’t meant for a trio and feed it into that; it’s always going to come out fresh and new.”

What that means in practice is that the Adrian Belew Power Trio can reinterpret some of King Crimson’s most challenging material – some of which was originally played by six musicians – and present it in a manner that’s at once faithful to the original and adventurously new.

At the core of that approach is the simultaneous yet sympathetic improvisation that occurs among Belew, Slick and Tobias. “But there is a bit of following one another in there,” Belew insists. “The idea is to listen to each other and sort of see where each one is going.”

By its nature, every show on the Power Trio’s tour is unique. Belew says that while “probably 85% of the show is well thought out, we like to have some time where we can just kind of go wild. And it’s really fun.”