In a valiant attempt to provide helpful points of reference for music listeners, journalists have concocted all manner of genre labels. Some – folk-rock, for example – are useful in describing a style of music. Others are virtually meaningless. So it is with post-rock, a term first used in the mid 1990s to describe music built upon rock instrumentation yet drawing its primary inspiration from outside rock.

That may or may not be an accurate manner in which to describe Russian Circles. Formed in 2004, the Chicago trio makes distinctive instrumental music that may remind some listeners of modern-day King Crimson crossed with Tool; hypnotic melodies – often delivered in the form of punishing riffs – has been Russian Circles’ stock in trade across six studio album and a brand-new live disc, Live at Dunk! Fest. 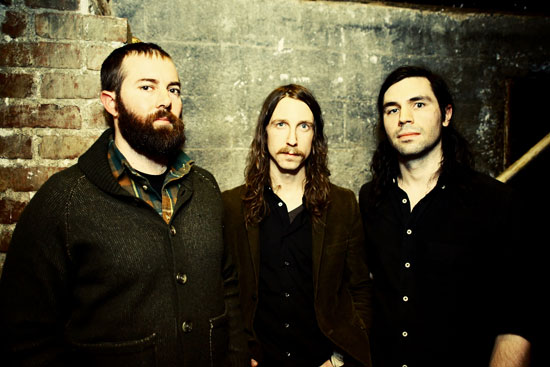 As far as being labeled a post-rock trio, bassist Brian Cook tells me, “We don’t have much choice in the matter. It’s a label that’s stuck.” He mentions that while on tour, the band often listens to extreme metal band Rotting Christ, 1970s German “krautrock” pioneers Neu!, and the resolutely unclassifiable Swedish group GOAT. “Apparently,” Cook says,” when you draw your inspiration from that kind of mixture of bands, you wind up playing post-metal.” But he doesn’t think that label fits Russian Circles, either.

Forgoing vocals means that the trio – Cook plus guitarist Mike Sullivan and drummer Dave Turncrantz – creates each song’s vibe and aura wholly by instrumental means. Cook and his band mates don’t set out to write songs that convey a specific meaning. “It’s more interesting to write music that resonates on a visceral level and then try to find the subconscious impetus behind the material,” he says. He prefers that to “waking up one morning and deciding you’re gonna write an album about how vivisection is awful, or something like that. That just seems forced.”

The band has carefully expanded its sonic palette over the course of its album releases. “I love listening to albums where there’s a lot of variation in timbre between all the songs,” Cook says. “It helps keep the ears from getting fatigued. Mike and I are more interested in making things texturally interesting than in writing complicated riffs.”

More recent Russian Circles albums like 2016’s Guidance make occasional use of acoustic guitar; that instrument was not a feature of Enter, the trio’s 2006 debut. And ever since 2011, Cook has added Moog Taurus pedals to his studio and onstage rig. “So now I play keyboard with my feet,” he says. “There are also a few songs with baritone guitar instead of bass, so we’ve expanded our arsenal a little bit in that regard.”

But both aesthetic and practical considerations keep Russian Circles firmly rooted in the guitar-bass-drums format. “Adding more gear runs counter to the whole premise of keeping things simple,” Cook says. “Our luggage expenses when we tour overseas are high enough without one of us deciding he wants to play harp on one song!”