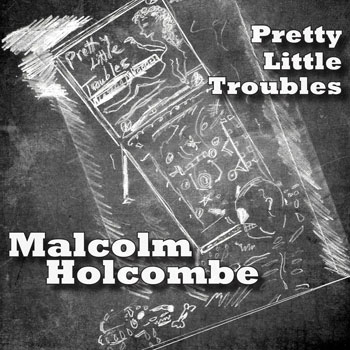 One of the first things one notices when listening to Pretty Little Troubles – the 15th album from Weaverville, N.C. folk artist Malcolm Holcombe – is the sharp contrast between the music and the singing. For this album, Holcombe has enlisted the musical support of multi-instrumentalist and producer Darrell Scott and a short list of other ace players; the various ensembles create warm, inviting and intriguing musical landscapes for Holcombe’s often dark yet universal and familiar themes.

But that instrumentation – which includes Holcombe’s facile acoustic guitar work – is set sharply against the artist’s undeniably hoary, lived-in vocal delivery. And while Holcombe’s themes are reliably downtrodden, there’s a defiant sense of – if not quite optimism – defiant resignation that burrows deep into his work.

While Holcombe is nominally a mountain musician, the songs on Pretty Little Troubles are deeply informed as much by by gospel and Delta blues styles as by traditional Appalachian folk music.

Scott’s production vibe on Pretty Little Troubles is deliciously “live,” and even without headphones, the listener is placed right in the center of the music. And while the general feel of the album is no-frills, it’s clear that a great deal of care went into creating that spontaneous feel. The vocal backing provided by Holcombe’s associates – primarily Scott, Jared Tyler and Verlon Thompson – is made to sound like a much larger chorus. That chorus often suggests a Venn Diagram intersection of rural church choirs, prison chain gangs of the old South, and the slick harmonies of the Jordanaires.

Holcombe makes a point of being plain-spoken, but he has a preternatural ability to make a well-worn phrase feel new. Case in point: Pretty Little Troubles‘ fourth cut, “Outta Luck” includes the familiar phrase, “cold hands, warm heart,” but he couches the expression in a larger lyrical context that makes it feel like a wholly original construct.

Holcombe’s choices of additional instrumentation on selected tracks – slide guitar on “Outta Luck,” keening pedal steel on several tracks, Jelly Roll Johnson’s harmonica – add subtle bits of dimension to his simple melodies. Yet when all of those adornments are stripped away, as on the solo guitar-and-vocal “Damn Weeds” – Holcombe shows that he doesn’t, strictly speaking, need those things; he only adds instruments when he wants to.

The finest examples of Holcombe’s use of augmented instrumentation on Pretty Little Troubles are the Celtic-flavored “Eyes of Josephine” and the soaring “The Sky Stood Still.” The latter switches between romping, uptempo sections and meditative breaks; thanks to Jonathan Yudkin’s strings, it’s easily the album’s most musically sophisticated piece.

Malcolm Holcombe’s voice – think Tom Waits with his teeth out – probably wouldn’t work well singing anybody else’s songs. But for his original work, there’s likely no better instrument on this earth. His vocal phrasing and delivery are as loose and rough-hewn as the arrangements are crystalline, and it’s the tension between those qualities that makes Pretty Little Troubles such a worthwhile listening experience.