Home  »  classical • interview • rawk   »   For Ian Anderson, It’s Not Just Another Day at the Office

For Ian Anderson, It’s Not Just Another Day at the Office

Jethro Tull started out as a blues band; the group’s 1968 debut album This Was drew to a large degree upon jazz and blues styles. But under the leadership of founder Ian Anderson, Jethro Tull soon moved into a style of its own, a European folk-tinged kind of progressive rock. That approach served the band well across nearly 20 albums between 1969 and the early 21st century.

As a band, Jethro Tull ceased operations in 2011; these days, Anderson – who wrote nearly all the group’s material, and had always been the face and voice of the band – bills his performances as “Jethro Tull by Ian Anderson.” And while the progressive-flavored arrangements are still a key component of the music, for select shows including a May 26 date at Red Rocks in Colorado, Anderson and band are joined by an orchestra. 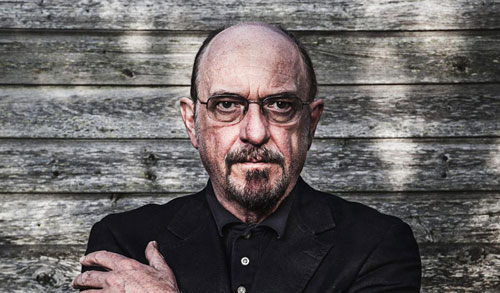 “I’ve been doing orchestral concerts for about 15 years now,” Anderson says. “And it’s a fairly well worn procedure. We have an ever slightly expanding repertoire of music where we have arrangements for the main instruments of the orchestra.” But he hesitates to use the term “symphony orchestra,” because, as he explains, “there are certain instruments that you would find usually incorporated into a full symphony orchestra – perhaps 60 players – which we don’t use.”

Anderson runs down a list of instrumentalists who play alongside his five-piece rock band: first and second violins, violas, cellos and contra-bass; a small brass section of two trumpets, two French horns and a trombone; and a similarly scaled-down woodwind section (oboe, bassoon, and flute doubling piccolo. “It’s a compact orchestra of a manageable size,” Anderson says.

The orchestral musicians allow the arrangements – under direction of Anderson’s longtime musical associate John O’Hara – to expand, grow and incorporate some of the classical motifs that were often hinted at in the original studio recordings. But there remain technical challenges in attempting to combine rock and classical musicians, especially onstage.

“It’s not a question of us doing a concert as we would normally do it, and then bolting an orchestra on the side,” Anderson emphasizes. “That’s usually what rock bands do, which is why you could never hear the orchestra!” For Anderson’s orchestral concerts, each instrument is mic’d. “Using open microphones over a group of musicians in a live context is disastrous,” he says, “picking up all the sound from everywhere – including the audience – which just then becomes a cacophony.”

He explains further: “If you’re going to amplify an orchestra – as opposed to them being acoustically in a typical concert hall – then you have to think about it in a very different way. We’ve been doing this for so long that we know the setup.” That setup requires the rock musicians to alter their playing style, and, even more importantly, their volume. Anderson has a handy reference for his rock musicians when playing with an orchestra: “If you’re playing any louder than the first violinist, then you’re too loud!”

The rock players use in-ear monitors, but the orchestral players – who are playing acoustic instruments, after all – do not. “They do need a little bit of on-stage monitoring of what everybody is doing,” Anderson says, “but we try to do it very, very carefully. If you listen to the on-stage monitors, they’re quieter than you would run your home stereo; we’re not talking rock band stuff here.”

Anderson’s attention to detail results in a live mix that balances the orchestral musicians’ sound with that of the rock players. An he believes that that delicate balance is a quality that many other rock-band-with-orchestra ensembles lack. “With all respect to those who try to do it, they start off thinking somehow they can just do it. For the rock band it can be another day at the office,” he says, “and somehow somebody is going to wave a magic wand and make the symphony orchestra intelligible in the context of a full-blown rock concert. That just doesn’t work.”