To preview a Johnny Mathis concert, my editor at Salt Lake City Paper recently asked me to compile a playlist of the vocalist’s lesser-known tracks. This I did. The piece as it ran was edited for space, but some good stuff got cut. Here’s the entire essay. — bk 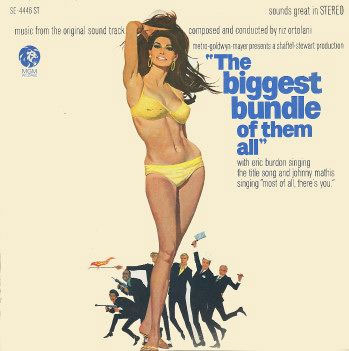 Johnny Mathis has been a staggeringly popular recording artist and performer for more than 60 years; the three-time Grammy Hall of Fame inductee has never been a stranger to success. His 1958 LP Johnny’s Greatest Hits is widely acknowledged as the prototypical best-of collection, and like dozens of his other albums, it sold in massive quantities. “The Voice of Romance” is best known for his 1957 hit single “Chances Are,” but he has scored hit singles on one or another chart every decade from the 1950s onward. His most recent single, 2013’s “Sending You a Little Christmas” reached #4 on the Adult Contemporary chart. The 81-year old singer’s current “The Voice of Romance” tour dates draw material from throughout his long career, rightly focusing on the hits. But eyond those big-selling tunes, a deeper dig into Mathis’ massive catalogue (71 albums and counting) unearths many gems … and a few oddities.

“When Sunny Gets Blue” from Love is the Thing (Capitol, 1957)
As the lesser-heard b-side of Mathis’ first single (“Wonderful! Wonderful”) this tune helped established the Mathis formula: exactingly enunciated, effortless vocals against a lush string accompaniment. “When Sunny Gets Blue” got some latter-day publicity when DJ Rick Dees cut a parody version that included the memorable lyric, “When Sunny sniffs glue.” The composer took Dees to court for copyright violation … and lost.

“Have Reindeer Will Travel” from The Sounds of Christmas (Mercury, 1963)
Another b-side, “Reindeer” was the flip of Mathis’ “The Little Drummer Boy.” By the time of this release, Mathis had already established himself as a reliable source of new Christmas music; his 1958 LP Merry Christmas reached #2 on the then-new Christmas Albums chart. The novelty tune’s lyrics are an attempted riff on “Have Gun Will Travel,” the TV theme song sung by a completely different Johnny, Johnny Western.

“Night Dreams” from The Singles(Legacy/Sony Music, 2015)
This 1968 tune was released as a Columbia single in 1968, and reached the lower rungs of the Adult Contemporary charts that year. But it would take nearly a half century for “Night Dreams” to find its way onto an album. The Singles stands out as one of the best Mathis collections; the box set features more than 30 songs that hadn’t appeared on CD before. The song itself – written by “Strangers in the Night” composer Bert Kaempfert – is vintage easy-listening Johnny Mathis.

“Don’t Go Breakin’ My Heart” from Love is Blue(Columbia, 1968)
Most definitely not the 1976 Elton John/Kiki Dee duet, this song is a little-heard gem that’s quite representative of the output of smash songwriter team Burt Bacharach and Hal David. Love is Blue was another in the tried-and-true formula of all-covers albums; here Mathis proves once again his skill at making songs his own. The female vocal accompaniment relegates the tune to period-piece status, but viewed in that context, it’s a minor classic.

“Evil Ways” from Close to You(Columbia, 1970)
This, however, is the tune you’re thinking of. Santana scored their first Top 40 hit with “Evil Ways” in early 1970, and for his cover, Mathis changed his easy-listening ways. His version doesn’t exactly rock, but it does swing hard, and is reminiscent of the knowing pop covers Buddy Rich was playing around that time. The song features a tasty Hammond organ solo; it’s not impossible to imagine parents and teens of the day actually enjoying this track together.

“Every Time You Touch Me (I Get High)” from I Only Have Eyes for You(Columbia, 1976)
With its wah-wah guitars and understated brass and strings, this cover of a Charlie Rich tune was Mathis’ b-side of minor hit “Yellow Roses on Her Gown.” It might disappoint crate-diggers who think they’ve discovered a long-lost Johnny Mathis psychedelic record. Mathis is in standard romantic crooning mode, but the arrangement feels forced; it might have done better in a version by Barry White.

“The Lights of Rio” from Different Kinda Different (Columbia, 1980)
As recently as last year, Mathis’ live set included “Brazil (Aquarela do Brasil),” a song he cut in 1998. From 1980, “The Lights of Rio” is one of his earliest Brazilian-flavored musical excursions. By this stage in his career, the singer had found success recording duets with popular female singers, and on this LP his vocal foil is one Paulette, though on “The Lights of Rio” she only gets five words.

“Most of All There’s You” from The Biggest Bundle of Them All (MGM Records, 1968)
Even the great Johnny Mathis turns out a dud once in a while. Perhaps his most cringe-worthy recording ever, “Most of All There’s You” – the soundtrack to a 1968 Raquel Welch caper comedy – hasn’t appeared on any of Mathis’ albums. In fact Johnny’s vocal isn’t quite awful; he gamely sings along while the band churns out an overwrought melody replete with vocal whoops, choirs and grating tuned percussion. Don’t expect to hear this one at the show.