Album Review: The Moon and You — Endless Maria 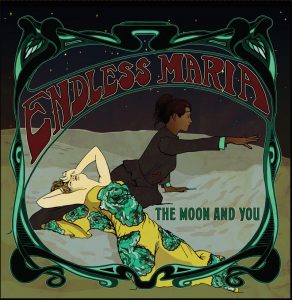 With Endless Maria, Asheville NC duo The Moon and You proves that you can indeed have it both ways: this new collection of songs hits the sweet spot between bouncy pop and something more substantial. The disc is the duo’s third release, following a 2013 debut EP (The Ocean’s Lonely Daughter) and 2016’s full-length A White Light That Sings. Nominally, The Moon and You is a folk duo, but that label is far too limiting to capture the essence of the sounds found on Endless Maria.

The disc opens with “Throw Me Out in the Summer Wind,” and it’s just as a leadoff track should be; a tidy distillation of the album’s best characteristics, rolled compactly into less than three minutes. Ryan Furstenburg’s upbeat lead vocal is supported not only by his wife and musical partner Melissa Hyman (also a member of Sweet Claudette), but by a irresistibly catchy melody. But The Moon and You applies its signature instrumental approach to that melody: a cello-centric string arrangement.

In less capable hands, that baroque-meets pop approach could equal (at worst) utter disaster, or at least an uncomfortable clash of disparate styles. But Furstenburg and Hyman show that baroque pop need not be precious; in the form of “Throw Me Out in the Summer Wind,” it’s delightful and guileless.

Which isn’t to suggest that The Moon and You is unwilling or unable to take on weightier musical endeavors. The waltzing title track suggests the grandeur of a dance in formalwear aboard an early 20th century luxury liner; Furstenburg’s subtle banjo work – now there’s a phrase one doesn’t often encounter! – adds just the right amount of homespun feel to a stately and refined number. And Hyman’s sultry vocal is oh-so sophisticated that when one realizes she’s singing some of the lyrics in French, the reaction might be, “well, of course she is.” Perfection.

“Evil” mines a more conventional singer/songwriter vein, with a spare arrangement that suggests early 1970s Carole King or Laura Nyro, if those artists employed a string quartet alongside a standard acoustic rock ensemble. Hyman’s descending string lines add a dark, mysterious and slightly foreboding air to the tune, one that’s full of melodrama and intrigue.

As its title telegraphs, “Freight Train” is a countrfied number. Furstenburg’s lead vocal and banjo chug along, aided and abetted by a shuffling snare drum. But Hyman’s strings add qualities that take the song out of the clutches of the ordinary. And the couple’s sweet harmonies are judiciously sprinkled throughout the tune, proving that less is more: after Hyman’s harmony vocal pops in for a brief line or two, it leaves the listener breathlessly waiting for the next harmony vocal line to appear.

The spare instrumentals of “Brown Recluse” support Furstenburg’s sonorous lead vocal, and help place the emphasis on the song’s lyrics, some of the best and most evocative on Endless Maria. The quiet and contemplative “The Bottom” showcases Hyman’s most soulful lead vocal; her voice’s jazzy qualities come to the fore here, and they’re even more appealing in the song’s instrumental context, which is closer to cowboy country than to jazz. Furstenburg’s melancholy harmonica line adds just the right touch.

Melissa Hyman’s pliant and crystalline upper register is showcased on “Sister.” For the song’s first half, the instrumentation is wisely limited to a plucked cello and perhaps a few other subtle bits of classical string work. And even when the arrangement adds a bit more complexity, it’s still wonderfully understated.

That understated approach is the defining characteristic of “Lighthouse,” the closing track on Endless Maria. The tune’s melody and arrangement suggest timeless songwriters like Kris Kristofferson; the song’s metaphorical lyrics paint a seemingly endless series of intriguing word pictures.

Tags:asheville, melissa hyman, The Moon and You