Music historians often observe that the Beatles-led, so-called British Invasion was an example of British musicians absorbing American influences, and then serving that music back to Americans. In a sense, Los Angeles-based Dengue Fever did something similar when the band started out in 2001. Brothers Ethan and Zac Holtzman had discovered the pop music of pre-Khmer Rouge Cambodia; the Southeast Asian music had been influenced by Western music, most notably garage-rock and psychedelia of the late 1960s.

Cambodian pop musicians and other artists had been purged and largely silenced during the reign of the Khmer Rouge throughout the 1970s. “After the Khmer Rouge, everybody totally forgot that music,” explains Nimol. “They weren’t listening any more.” After a 1995 visit to Cambodia, Ethan Holtzman returned home with cassettes of the music. Eventually – after recruiting Cambodian-born vocalist Chhom Nimol – Dengue Fever developed its own updated, Western-leaning take on the style.

And it works. Though a written description might suggest otherwise, the music of Dengue Fever is not at all gimmicky. It’s heartfelt and genuine, and – save for Nimol’s vocals, which are mostly in the Khmer (pronounced k-MY) language – won’t sound foreign to Western ears. Dengue Fever has endeavored to make certain their music – as found on seven albums and three EPs – can’t easily be pigeonholed into an easily-defined style.

But early in the band’s career, they were playing covers of those Cambodian tunes, songs that had endured in the consciousness of Southeast Asians despite being suppressed by the Khmer Rouge. When Dengue Fever first traveled back to Nimol’s homeland for a concert tour, no one was sure what to expect.

“I was very nervous,” says Nimol. “I didn’t know what was going on. But the first show in Cambodia was a great experience for me.” That trip was chronicled in the 2007 documentary film Sleepwalking Though the Mekong.

Despite some initial trepidation, the six members of Dengue Fever embraced the trip as a real opportunity. “We were interested in what the people of Cambodia were going to think about us,” Zac Holtzman recalls, “coming back to their country and playing [their music] with a Cambodian singer and a bunch of people of different nationalities.”

The band was warmly received. Holtzman recalls the words of one Cambodian who attended a show: “This is a really good thing for Cambodia; we’ve been in a funk for a long time, and we kind of forgot about how beautiful our past culture is; this ties us all together.”

“He was outside the club, almost in tears,” Holtzman says.

For her part, Nimol was flooded with phone calls and messages from her family and friends. “They were telling her, ‘You really make us proud, Nimol, for representing Cambodian culture in such a unique way.’, Holtzman recalls.” 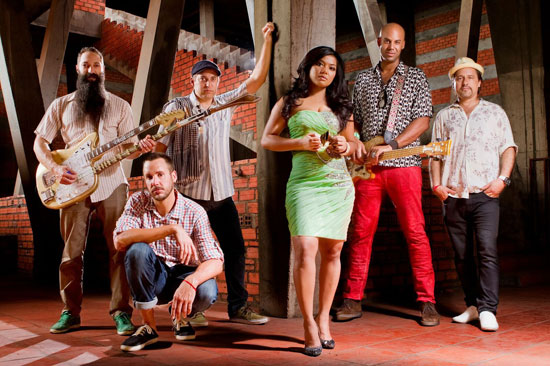 After shining a light on Cambodian pop, Dengue Fever set about developing its own signature sound. “Now we do something different,” Nimol says. “something in our own style.” The band’s latest release, 2015’s The Deepest Lake, is the band’s most engaging release yet. “We always try to bring all of our different influences to songwriting and playing,” Holtzman says. “I think that has kind of kept us out of being pigeonholed as just some retro ’60’s Cambodian band.”

But Dengue Fever isn’t likely to completely forsake its roots; lust look at the cover art of the band’s 2011 album Cannibal Courtship. The photo features Nimol standing next to Holtzman’s custom-made doubleneck instrument. “The bottom neck is a traditional Cambodian instrument called the Chapei dong veng,” Holztman explains. “The top half is a Fender Jazzmaster guitar. It enables me – for a few songs – to combine the two instruments, and symbolically combines the two cultures.”

The songs on The Deepest Lake build on elements of world music – not just from Southeast Asia – and apply them seamlessly into arrangements more reminiscent of groups like ? and the Mysterians. Zac Holtzman explains the group’s guiding songwriting principle: “We just give every single song whatever it’s asking for,” he says. “We don’t necessarily try to sound Cambodian; It sounds Cambodian enough when Nimol is singing!”

So what is Nimol singing about? “We go through this weird lyric writing process,” Holtzman explains. “Nimol might talk about some crazy thing that happened when she was a child in a Thai refugee camp. Then we’ll turn it into a story.”

But that’s just the beginning. “She’ll start singing it,” Holtzman says, “and then we’ll realize that some of the words don’t sound good. We have this old Khmer/English dictionary that we break out, trying to pick words that sound better.” He explains that as in English, certain sounds don’t work when they’re held out over a few beats. “Certain ones sound stupid,” he laughs, “like if you tried to hold the letter ‘L.’” He demonstrates: “Lllllllll … see? Stupid.”

In the end, the Dengue Fever songwriting process is what Holtzman describes as “build it up and break it down.” But he says that the end product is “a diamond-like ‘Cambodian haiku’ of a song. It’s very dense, and every word ends up being precious.”

With lyrics being put through those kinds of changes, it’s fair to wonder if they end up making sense in Nimol’s native Khmer. “Not as much,” Holtzman admits. But he quickly backpedals. “I mean, they do, but more poetically. Sometimes we have to convince Nimol that as artists we have the right to do whatever we want.”

That mindset carries over to Dengue Fever’s live shows, too. “Some people trip out about, ‘Ah, but it’s doesn’t sound exactly like it did on the record!’” Holtzman says. “Well, yeah. But we’re here dancing around and sweating … so just relax.”

Even if the lyrics end up making sense to Dengue Fever’s singer, most American listeners have no clue. But Nimol effectively conveys each song’s emotion, and the band’s arrangements get the ideas across in a way that resonates with listeners. “That’s the cool thing about music,” says Holtzman. “It’s one of the more primitive universal languages; you can appreciate it on all different levels. It’s not like you need to go to school and study in order to like it.”