Home  »  Americana • interview   »   The Wooks in Their Natural Habitat

The Wooks in Their Natural Habitat

Kentucky-based band the Wooks came together in early 2015; the group quickly established its core sound: an acoustic approach that bridges the gap between bluegrass, old-time music and the modern jam band aesthetic. The latter influence would seem to be reflected in the band’s name: if Wooks is short for wookie, then it may be useful to consult Urban Dictionary, which defines wookie in part as “a lifeless idiot whose whole existence consists of following around jam bands and not showering or shaving.” (See also: the photo near the end of this feature.)

Asked to comment on that description, guitarist CJ Cain demurs. “I’ll let Arthur handle that one,” he says with a chuckle, “since he is the main reason why we call ourselves that.” 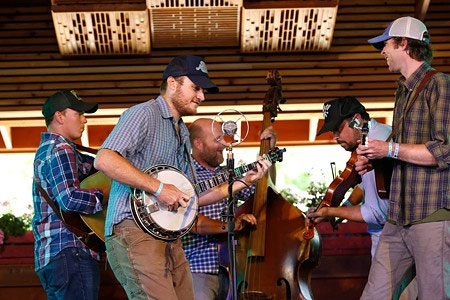 The Wooks (the band)

Banjo player Arthur Hancock clears his throat as if readying to read a prepared statement. “You can bring in philosophical types of thought,” he explains, “or even the nature of good versus bad. And those things all come into play when one asks, ‘What is a wook?’”

Before there’s a chance to change the subject, Hancock adds this: “We are of the reform sect, and we are here to put the good back into the wook. We are doing nothing but trying to make good music and spread the wooky way.”

Cain tries to get things back on track. “We really try to just let it be whatever the fans decide they want it to be; that’s all that matters.” Those fans are undeniably drawn to the Wooks’ deft mix of styles. Asked where the group belongs on the bluegrass-jam continuum, Cain is again circumspect. “It depends on what show you see, and where we’re at in the set list,” he explains. “Because we really don’t stay in any kind of genre for very long.”

A typical Wooks set does feature some extended jams, but there’s rock ‘n’ roll, bluegrass and old-time as well. “There are also our interpretations of singer/songwriter music,” Cain says, “but with more music behind it. More than just a guy with a guitar, singing.”

The Wooks take into consideration the audience they’re playing to. “You kind of feel the energy of the crowd,” Cain says, “so you kind of know what song you want to do next based on how they’re responding to you.” He provides a real-world example: “We wouldn’t want to go out and do a ten-minute jam of a Jerry Garcia song if it’s a traditional [music] crowd,” he says. “We might do that song, but we’d play it a little differently. And we might not use every pedalboard option.” 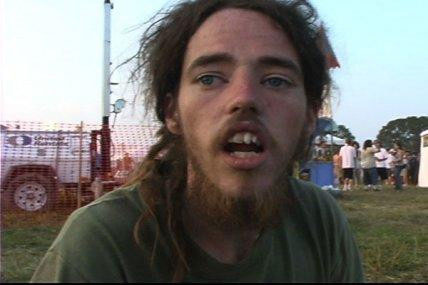 A Wookie in its natural habitat (Shakori Hills, Lockn’, etc.)

The Wooks often manage to be many things to many people, but they also endeavor not to alienate a crowd. “I’m probably one of the guys that CJ tells not to worry about it,” says Hancock, “but having been a traditional bluegrass fan, I’m pretty critical of our music in that way. Yet we’ve been able to get away with doing things that are far outside of the box in a way that I can’t really explain.”

Released last June, Little Circles is the group’s debut album. “We were lucky to have the support of a burgeoning fan base in Kentucky to help us get the record made,” Hancock explains. But good fortune played a part in the creation of the album as well. When he was in college, Hancock took an elective banjo course; the instructor was multiple Grammy Award nominee Alison Brown.

“As I grew older, I maintained communication with her,” Hancock says. “So when the Wooks decided to make a record, what better way to make one than with Alison Brown producing us at Compass Sound Studio in Nashville?”

Kentucky is home to the group’s largest fan base, though they’ve developed a significant following in Colorado as well. “On this tour, we’re going to hit places we’ve never been before,” says Hancock. “It’s going to be interesting to see how it goes; it’s all new territory for us. But either way, we’re just going to do what we do and hope for the best.” Because that’s the wookie way.