Pueblo, Colorado singer-songwriter Mike Clark enjoyed a big break when his band Haunted Windchimes scored two appearances – in 2011 and 2012 – on A Prairie Home Companion. And while that band continues, Clark’s songwriting is too big for just one band. His prodigious and varied output meant starting another musical project – The River Arkansas – right alongside Haunted Windchimes.

The performances on A Prairie Home Companion were a springboard for Clark, but also for others in the Colorado music community, he says. The radio show “shone a light on the music scene that we had going in Colorado Springs; there are lot of great bands in the Southern Colorado region.” 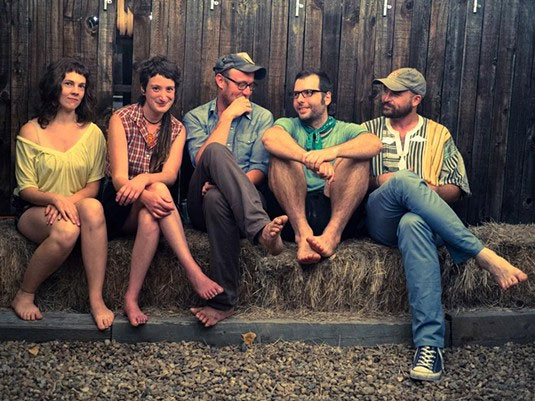 The River Arkansas is part of that scene now, too, with a new album, You Animal, set for release March 10. Clark says that having more than one group gives him “an opportunity to play all types of different genres.” He says that The River Arkansas itself is pretty diverse, but that in the main it serves as an outlet for his “quieter acoustic songs, things that fit better with violin and strings.”

Clark is confident that You Animal is the best collection yet of his songs. “It starts out nice and slow and builds and breaks throughout,” he says. “Some songs are really catchy, and others are really sad heartbreakers.”

The band’s instrumental makeup presents a very different side of Clark’s music. “A cello and a violin together just make the most beautiful sounds,” he says. Clark believes that Danah Overtree’s cello in particular “allows my more tender and slow songs to have a very powerful feel, and to be a little bit more emotionally charged.”

But the group approaches its material a bit differently than one might expect. “When we play fast songs, the strings are sometimes playing what you’d consider a horn part,” Clark says, “which, I think, adds a whole new texture.”

The band – Clark, Overtree, upright bassist Macon Terry, violinist Rachel Silker and Robin Chestnut on drums – plays its music in a variety of settings. “We do all different types of things. We do musical festivals, bars, art galleries, private parties and weddings.” With a laugh, he adds, “We’re taking about anything that comes our way if the deal seems good.”

But The River Arkansas doesn’t apply a one-set-fits-all approach to those varying shows. “I approach every gig differently,” Clark says. He recalls a recent Valentine’s Day performance in Nevada City. “There was no PA, and it was a loud bar full of people. We just set up with one microphone through an amplifier, and turned it into a dance party,” he says. “We just gave people what they wanted.”

The very next night, The River Arkansas played “a sleepy little saloon, and people wanted to hear the sad, slow stuff,” Clark says. “You just have to try and get a feel for the crowd, and you’ve got to do it really fast.” It helps greatly that The River Arkansas has a deep repertoire: “30 or 40 songs that we play as a band,” Clark says.

And there’s no rigid set list. “Some nights we play for three hours, some nights we play a 30 minute set. So I walk into every space trying to get an idea of what I think people are going to want, and then I just come off the cuff and make it up on the spot.”

There are built-in hazards to that kind of spontaneity. “ Sometimes I blow it,” Clark laughs. “Sometimes I pick the wrong collection of tunes, and the show can be really awkward and really bad.” But he can count on the support of his band mates, at least to a point. “They’re willing to go with me on whatever that journey is,” he says. “But sometimes when I blow it, I can see it in their eyes.”