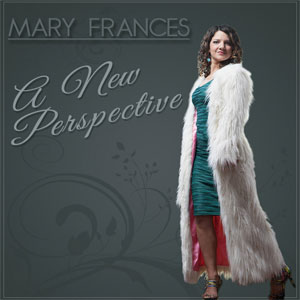 Mary Frances is best known as keyboardist and lead vocalist for Yo Mama’s Big Fat Booty Band, and for her work with Grammy Award-winning kid hop artist Secret Agent 23 Skidoo. But on her debut solo album, A New Perspective, Frances moves ever so slightly away from the collaborative nature of those projects, and toward a collection of songs that displays her musical talents front and center.

Frances wrote all but three of A New Perspective‘s 12 tracks; the remaining three are co-writes with her husband, drummer Lee Allen. The Booty Band’s Derrick Johnson plays trombone on about half of the album’s tracks. Cut in Nashville, A New Perspective is a deep exploration that showcases Frances’ musical dexterity.

Fans of the Booty Band will find much of A New Perspective in line with that band’s sound. Like most of the disc’s tracks, opener “Million Miles” features a deep funk groove, plenty of warm keyboard textures, and Frances’ multi-tracked vocals. In fact, Frances tackles all of the album’s vocal parts; in doing so, she creates a slinky vibe that strongly recalls early ’70s r&b trio Labelle at its best.

Frances is a multi-instrumentalist; while her main instrument is keyboard, she’s clearly adept on bass as well. Along with Allen’s ace drumming, Frances’ rubbery bass lines – on synth and electric bass – serve as the solid foundation for the tunes.

Much of A New Perspective is soul/funk, with inviting Hammond organ lines and subtle use of brass supporting the strong melodic lines. Frances alternates between highly charged dance-flavored numbers and slow-burn medium-tempo tunes. There’s a welcome compactness in Frances’ songwriting and arrangement: all but three of the disc’s tracks wrap up in under four minutes, and none of the remaining two meanders far beyond the five-minute mark.

The horn-filled “Take What’s Mine” is one of the record’s strongest tracks; it features tasty solos by Jennifer Hartswick (trumpet) and trombonist Johnson. Even when Frances slows things way down – as on “January” – the emotional content remains high, conveyed effectively by Frances’ expressive lead vocal.

But Frances’ voice isn’t the only star on A New Perspective: the instrumental “Habanero” has a strong Los Angelino flavor, and its many keyboards work together to provide some of the album’s most musically interesting and inventive moments. Evan Cobb’s flute work fits seamlessly into the mix, serving as the tune’s musical linchpin.

Allen’s trip-hop drumming is paired with some drawing-room styled acoustic piano on “Top of the World.” The tune unfolds with subtle use of other instruments, but the song’s minimalist arrangement is extremely effective. The downtempo “Break” is a modern instrumental that recalls the sexy ambiance of Zero 7; particularity intriguing is Frances’ use of Mellotron-styled, synthesized “ahh” vocal lines. As appealing an instrument as her voice is, the tune suggests that an entire album of Mary Frances instrumentals would be highly enjoyable.

On one hand, “Chase in the City” can be seen as proof that Mary Frances’s skills extend well beyond soul, funk and r&b. But the classic country style of the tune feels jarringly out of place on A New Perspective. While it’s a fine enough number – and really does illustrate Frances’ mastery at making authentic country music – its presence interrupts the flow of an otherwise musically cohesive album.

“Secrets” combines an Aretha Franklin vibe with a classical boogaloo feel reminiscent of the New Mastersounds. “GP” cranks up the funk, carving an irresistible groove; Casey Cramer – one of three guitarists on A New Perspective – turns in some understated but funky and essential guitar work, while Hartswick and Johnson peel off some soulful horn charts. A welcome reprise (“Break Outro”) feels like a credits-roll, and ends the album on a note that will leave listeners wanting more.