The elder Touré never wanted his son to become musicians; he wanted an easier life for him. Bowing somewhat to his father’s wishes, Vieux did not begin his recording career until after the 2006 death of his father. And though he has been touring and recording for a decade now, Vieux still recognizes the responsibility that comes with his famous surname. The Touré name “is a large part of my professional identity,” he admits, “whether or not I chose to embrace this. While there is a lot of pressure to walk in his footsteps, I am very proud to have this responsibility. It is an honor for me to continue his legacy.” 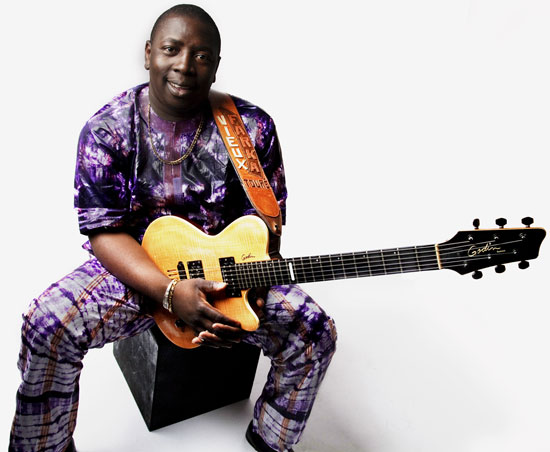 But Vieux doesn’t mimic his father’s musical approach. One listen to “Homafu Wawa,” the opening track on Samba, his seventh and latest album (released April 7) demonstrates that vividly. The guitar textures on the tune owe at least as much to indie-rock as to African musical traditions.

“I do not need to be exactly as Ali was, and do exactly what he did,” Vieux says, “but rather operate in the same spirit of honoring our culture while also growing the tradition to include different styles and ideas.” He says that as he grew up – Vieux was born in 1981 – he absorbed the influences of Western pop and rock music. “For an artist to be honest, he must make art that comes naturally,” Touré says. “And for me, what comes naturally is a mix of traditional music and modern music.”

Keen listeners will discover just how successfully Vieux creates that mix. “Homafu Wawa” has a strong central melody of its own, but also incorporates a melodic line from the reggae and rock classic “I Shot the Sheriff.” “Yes, of course,” Touré admits. “This is a small homage to the king, the great Bob Marley. He is a big inspiration for me and for the people of Mali in general.”

Touré arrives at his mix of styles effortlessly and honestly. “Honest art does not calculate which influences to use and which ones not to use,” he says. “You simply make the music that comes naturally.”

Beyond the debt Touré owes to the legacy of his father, he accepts an equal responsibility toward those who will listen to his music. “My responsibility is to put my heart and soul into the album, to make it as strong and pure as I can,” he says. “The responsibility I have to my fans is the same one that I have to myself. I must simply put forth the best effort that I can, and try to express what is inside of me as directly as possible through my music.”

The album title Samba has nothing to do with the same-named Brazilian style of music, though the latter does in fact have roots in West African tradition. “In my language, the Sonrai language, ‘Samba’ means ‘second-born,’” Touré explains. “This is me in Ali’s family.” The song “Samba Si Kairi” is the album’s centerpiece. “This song talks about my childhood, my parents,” Touré says. “My grandfather would sing ‘Samba Si Kairi’ to me as a child, and I would dance. Samba who never breaks, who never runs from threats, who is not afraid. This song is an homage to my grandparents.”

Samba was cut live in the studio, with an audience present. And each of the album’s ten songs was performed and recorded only once, capturing and preserving a sense of spontaneity. The inspiration for that approach comes from a quality source. “James Brown once said ‘The first take is God, the second take is man,’” Touré says. “And I agree with the great Godfather of Soul.”