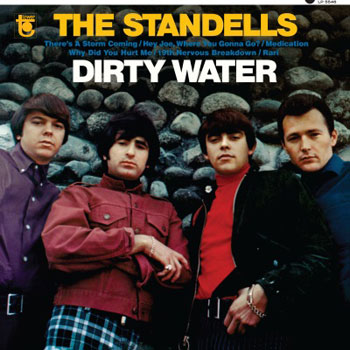 From one point of view, The Standells were opportunists. As that story goes, they got their start as a smiling, suited pop group, only changing their sound and collective demeanor once they took a new reading as to which way the pop culture winds were blowing. Moreover, that argument goes, they weren’t even from Boston, so how possibly could the city of “Dirty Water” be their home?

But all that misses the point. Listening to their debut 1964 LP, In Person at P.J.’s (revised and reissued two years later as Live and Out of Sight), it’s clear that from the group’s start, they were a garage-rocking combo, albeit one with better than average vocal and instrumental proficiency. Sure, they were a cover band in those days, but so was pretty much everyone. That only began to change after February 1964 when the Beatles wiped the slate clean.

Still, it’s true that when The Standells made their celebrated television appearance on The Munsters, they came off closer to Marilyn than Eddie. But they soon simultaneously sharpened and roughed-up their image, and in the two dozen months between the start of 1966 and the end of ’67, made three very good albums.

I know what the three or four Standells scholars reading this are thinking: “Aha! But they made four albums in that period!” You’re correct. I said they made three very good ones. The outlier is The Hot Ones!, a collection of covers that – while arguably of a piece with In Person at P.J.’s – isn’t especially durable or relevant. It’s interesting for completists, but the rest of us – a group that should include the most ardent garage-rock fetishists – can and should be satisfied with the other three.

Those three records – Dirty Water from ’66, Why Pick On Me / Sometimes Good Guys Don’t Wear White (also ’66) and 1967’s Try It – have all worn quite well in the half century since their original release. Now (and thanks to Sundazed) on CD with bonus tracks and in glorious back-to-monaural sound, they’re well worth re-investigating. 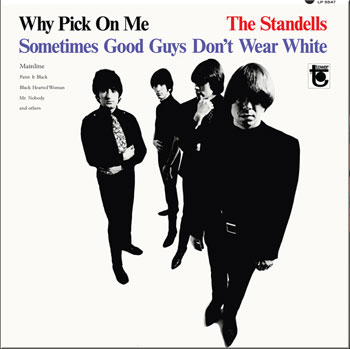 Sure, the bass line that serves as the foundation of “Little Sally Tease” is a nick from The Strangeloves‘ “Night Time,” but who cares? The rest of the tune stands on its own. Fun fact: the tune is a remake of Don & the Goodtimes‘ original, penned by Jim Valley, a fine guitarist who was for a time known as “Harpo,” Drake Levin‘s replacement in Paul Revere & the Raiders.

The covers are well chosen, the group originals are strong, and there really isn’t a weak track on Dirty Water. A slightly pilled-up (well, at least sped-up) take on the Rolling Stones‘ “19th Nervous Breakdown” doesn’t add much to the original, but it’s fun and well done. (Presumably it wasn’t in the band’s live set on the tour in support of the album, seeing as they were opening most nights for the Stones.) The CD’s bonus cuts are of varying quality. The Batman theme is fun in a cheesy go-go kind of way.

On the heels of the success of the “Dirty Water” single, another album was put together, and that clumsily-titled album was built around a song that had already appeared on Dirty Water. “Sometimes Good Guys Don’t Wear White” is perhaps the Standells’ most perfectly realized track; it has the feel of an anthem, and it rocks. A subtle dig at drug culture is woven into the song’s lyric. Elsewhere listeners will find suitably inventive covers of the Stones (“Paint It Black”) and Love (“My Little Red Book”). Overall the audio quality is an improvement over Dirty Water, and the organ flourishes on the otherwise punky “Why Pick On Me” are positively exotic. A group original, “The Girl and the Moon” straddles garage rock and Phil Spector arrangement aesthetic. The gritty “Mr. Nobody” is the best deep album cut. 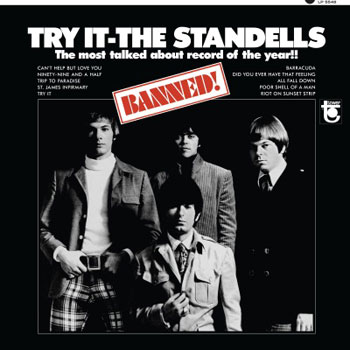 The group would capitalize on the banning of the admitted sexual come-on of “Try It.” A Texas radio programmer found it suitably naughty to drop it from playlists. Overall, the Try It album boasts yet another improvement in sound quality, and the performances warrant the extra care. Everything about “Can’t Help But Love You” suggests a leap forward in professionalism.

Even a cover of the well-worn “Ninety-nine and a Half” shines here, as does a much older tune, “St. James Infirmary.” The garage aesthetic is dialed back in favor of something a bit more upscale, and horn charts are sprinkled atop several of the tunes. Piano and strings on “Trip to Paradise” take things even farther afield. All those studio decorations did, however, have the effect of blunting The Standells’ garage-rock cred.

Happily, the second side of Try It focuses on the group’s grittier side. The faux-eastern vibe of “Did You Ever Have that Feeling” lifts it above its derivative chord progression. “All Fall Down” is as close as The Standells came to psychedelia. Not very close at all, but fascinating nonetheless. And the classic film theme “Riot on Susnset Strip” makes purchase of the album mandatory.

By 1968, The Standells were all but over. Though of course various lineups would re-form in later years, these three albums would form the core of the band’s essential output. Also of interest is Live on Tour 1966!, an archival Standells release reviewed in these pages in 2015.