The Beth Hart Interview, Part 2: “It’s just about being fuckin’ honest and real.”

Beth Hart: Oh, yeah. At first, you know, some people are better at learning things than others. Some people have really great memory, so they can just do it. And then with other people, it takes time. But if they fuck it up in a show, I don’t freak out on them.

My favorite drummer in the world is Bill Ransom, but I didn’t get to have Bill for a little while – he had some personal shit at home – so I went with another guy for a few months. And there were songs I’d throw at him which he never had a chance to listen, review, nothing. It was on the spot.

Not to embarrass them or to be a control freak – I swear to God it’s not that – it’s to help them and the audience see that we’re human and we can trust ourselves. When you’re making music you just listen; if you really listen to the other players, you can kind of feel where it’s going to go. 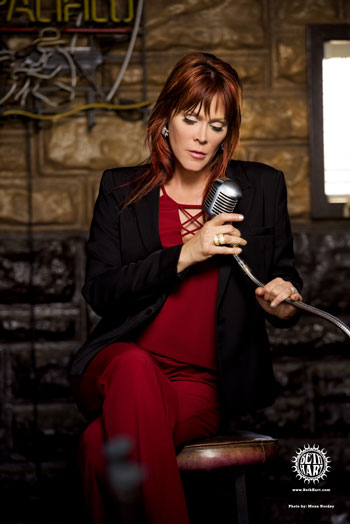 That makes a lot of sense, and it also adds an element of spontaneity to the show. It’s the same aesthetic as doing the stuff live in the studio: there’s something just more real. If the whole thing is going to be antiseptic, you might as well as just sequence it all, press a button and walk off stage.

Exactly! It’s all about catching that natural human condition. I think there’s nothing more important we – as performers or people making records – are willing to show our human nature so other people can be reflected back. But as different as we all are in different places and different childhood, we’re still fundamentally the same. We need love, we need fuckin’ food, we’re all afraid to die and we all are trying to search for something that gives us some kind of meaning so we can do something with our lives. If we’re willing to do that in our records and on the road, then we’re doing our job. It’s not about me looking great or singing perfect or John having the most amazing solo, I don’t think it’s about that at all, I think it’s just about being fuckin’ honest and real with the audience.

I understand that you have a third collaborative album with Joe Bonamassa already in the can. Did you use the same quick approach making that album?

Oh, yes. We did the same exact thing with Kevin Shirley; he just picks the guys that he loves and we go on in and just zip it out real fast. We did – I think we did [2013’s] Seesaw in four days. We were in Vegas, in this really cool place called The Palm. They have a really cool music studio over there. I think it’s going to come out nice. I hope so; I haven’t heard anything yet. We have another gaggle of genres goin’ on; it’s really extreme. We go from Humble Pie’s “Black Coffee” all the way over to Ella Fitzgerald.

So yes, again, sweet, easy, get in get out and just do music together that we enjoy without fucking thinking about it like crazy. For me, all the thinking is just fear and doubting and fucking guessing. It just should be like, “Yeah, we’re doing this and we’re putting it out there, and we’re not going to question it.” And Kevin is notorious for doing that. Kevin does two-day records; when we did [2011’s] Don’t Explain, it took two days to make that album. We did one day, and then a bunch of months went by because Joe could only be in the studio that one day. And then we came back for one more day, and it was done.

Fire On The Floor sounds almost like a mixtape, except that there is a unifying element of your voice and your songwriting. Did you set out specifically to write a varied bunch of songs, or did that happen on its own?

I always write all over the place, because I grew up being inspired by so many different genres. So I think it only makes sense that as a writer those different genres are going to come out. When I turn in music to a producer, I know he’s the right guy if he doesn’t say a word about that. For me, the biggest turn off is someone who says,”It’s not cohesive.” If I hear that, I’m not gettin’ in bed with that guy; that’s not what I’m after.I have no interest in doing the same song over and over in a different key and a different tempo for 12 songs on a record.

So that’s one of the things I love about Oliver is … I turned in a ton of shit, and he wouldn’t say one word about that. It was so great. The only thing he ever mentioned was – because I write a lot of ballads – “Okay, I’m going to make sure this whole thing is uptempo” or not. That was the only thing he said.

I’m so happy I don’t have a label that says [“It’s not cohesive”]. Because when I was with Atlantic, they were really crummy about that. Not the whole company, of course, but a couple of people that were working with me. They were like, “You know, this has got to stand for something.” And I was like, “What the fuck does that all mean, dude?” Let it be what it is, you know?