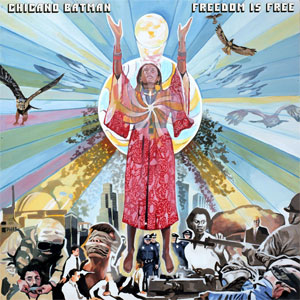 File next to: War, Mayer Hawthorne, Sly & the Family Stone

The spirit of late-sixties psychedelic soul is alive in Chicano Batman. On this collection of twelve socially aware originals, the Los Angeles quartet – augmented with an alluring female vocal chorus – makes some of the best music of its career. Musically, Freedom is Free is an aural travelogue of the styles that inform the group’s unique approach: soul, Brazilian tropicalia and gritty L.A. funk are just a few of the styles put to use behind the songs. The silky-smooth vocals of Bardo Martinez are set against inventive arrangements like that found on the sexy groove of “Jelaousy.” Even when Martinez occasionally sings in Spanish – as on the kinetic, wah-wah guitar-filled “Flecha al Sol” – the emotional content comes through loud and clear. The title track and single “Friendship (Is a Small Boat in a Storm)” are teasers for an album full of gems.

You may also enjoy my Chicano Batman interview.