The practice of combining disparate musical genres has been around for many years: a hybrid of rock and jazz, fusion developed in the late 1960s. But the idea of combining classical music and hip-hop remained largely unexplored until a pair of Florida musicians formed Black Violin in the mid 1990s.

Violists Wilner “Wil B” Baptiste and Kevin “Kev Marcus” Sylvester met each other in their South Florida high school, where both performed in the orchestra. Baptiste told a story in an interview with MPEG 4 about how he wanted to play saxophone and was enrolled in the wrong class, but the connection to the violin was instant and eventually led to a full college scholarship.

Marcus’ back story is a bit more straightforward: “My mom made me start playing the violin when I was in the fifth grade,” he says. “She felt that I had idle hands, that I would find my way into trouble.” He excelled, and was soon accepted into a performing arts middle school. “From sixth grade until I graduated high school, every day, second period, I had orchestra class. For seven years!” 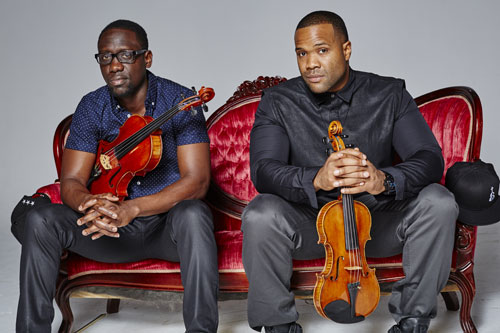 At that point, they enjoyed hip-hop, but their focus was on classical music. Marcus credits the germ of the Black Violin concept to his Sony Ericsson cell phone.

Programmable ringtones had just been developed. “There was this popular song on the radio,” Marcus says. “Busta Rhymes’ ‘Gimme Some More’ had this eerie violin line in it. So I learned that line, and programmed it into my phone.”

What he forgot to do was turn off his ringer when he went to orchestra class. He says that when his phone rang, his classmates were all asking, “How did you get Busta Rhymes on your phone?” Before he could explain, his cell phone was confiscated by the teacher.

But Kev got the phone back at the end of class, and he gathered with some of his classmates. “I showed the first violinist the notes, and the the violas came up with the middle line. The cello took the bass line, and all of a sudden the whole orchestra was playing ‘Gimme Some More,’ just out of nowhere!”

Marcus didn’t act on that inspiration until shortly before his graduation from Florida International University, where he had been studying music on a full scholarship. “Wil studied at Florida State University,” Marcus says, “and we got together, deciding we would try to be big hip-hop producers. We wanted to be like Pharrell, like Timbaland; they were our heroes. So we made beats in the studio.” But they used their classical training to give themselves an upper hand, he says.

Whenever rappers would listen to the beats Wil B and Kev had developed, Marcus says the duo would go into an adjacent room, pick up their classical instruments, and play along. “You could see it on their faces,” Marcus recalls with a smile. “They were like, ‘I’ve never heard anything like that!’ And we thought, ‘maybe we should do this more.’”

Marcus says that building on the the hybrid form has been effortless. “I tell kids all the time,” he says, “the hard part isn’t that we put the classical and the hip hop together. The hard part was noticing that people thought it was something interesting and different.”

It certainly was different; so much so, in fact, that gigs in Miami weren’t easy to come by. “We would go to clubs, and our manager would go inside and talk to the club owner or the manager. He’d say, ‘Hey man, I’ve got these two black guys; they play violins with hip hop. It’s cool. You should see it.’ And they would laugh us out the door!”

But Kev and Wil B would not be deterred. They’d back their manager’s Ford Expedition up close to the club, open the trunk, and crank up “whatever was on the radio,” Marcus says. “We’d turn it on full blast, and we’d play along right there on the sidewalk.” They’d quickly draw a crowd. “Then a club manager would come out and say, ‘Wait a minute, is this what you’re talking about? Come in tonight, and we’ll see what’s up.”

Black Violin’s exciting combination of classical music (and originals in that style) mixed with hip-hop beats proved a huge success. The duo released Stereotypes, its third album (and first on a major label, Universal Music Classics) in 2015. Black Violin tours around the world, and in most cities Wil B and Kev schedule additional daytime performances for students.

“Our goal for our kids’ show is the same as the adult shows,” Marcus says. “It’s to entertain, educate and inspire, simultaneously. You’re teaching them something, but they don’t even know that they’re learning.”