In 2004, Texas-based Los Lonely Boys scored their biggest hit to date, “Heaven.” The single charted on adult contemporary, country and pop charts, underscoring an important fact about the trio of brothers: their music has always transcended genres. Too often and unfairly pigeonholed as a Mexican-American rock band, Los Lonely Boys draw from many styles of music to create their original songs.

The three San Angelo, Texas natives – bassist and lead vocalist Jojo Garza plus brothers Henry (guitar) and Ringo (drums) – had been playing music together for many years when their self-titled debut album was reissued by a major label. Epic signed the group on the strength of the regional success of “Heaven,” even though Jojo says the label execs “didn’t even like ‘Heaven’ to begin with.” 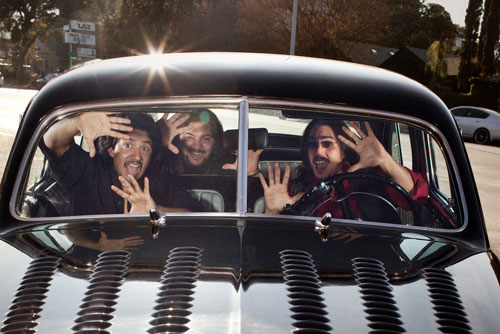 Originally released on the independent label Or Music, the single was a runaway success, and that caught the attention of the major labels. “Los Lonely Boys were selling thousands of copies out of our trunk,” says Jojo. “And anybody’s going to want to jump on a wagon that’s moving that fast.”

But once signed to a major, the pressure was on for Los Lonely Boys to deliver more of the same. “We’d always told everyone that ‘Heaven’ is a song we’re very, very proud of,” says Jojo. “But at the same time, Los Lonely Boys were always about music, not just a particular style of music.” The group’s subsequent albums would feature nearly all original material, mostly written by the three Garza brothers. But that music was much more than a bunch of “Heaven” retreads. After a pair of well-received records for Epic, Los Lonely Boys returned to self-releasing their albums. And while their albums Rockpango and their most recent (2014’s Revelation) didn’t spawn hit singles, both charted.

Listening to any of the group’s albums – including Revelation – one can detect the influence of artists as diverse as Bob Marley and Doug Sahm. As leader of the Sir Douglas Quintet and on solo recordings, Sahm was a Texas music legend, and he deftly combined roots, rock, country and Tejano styles into a distinctly Texas-flavored music. “We have a lot of the same elements in our music,” Jojo says. “It’s in the water, in the air.”

Bands of siblings often have a reputation for internal disharmony: the Everly Brothers, the Kinks’ Ray and Dave Davies and the Gallagher brothers in Oasis are all legendary for their in-fighting. “I’d be lying if I said it was all peace and harmony,” laughs Jojo. “The truth is, without those dark times and those hard times, you can’t really find the peace and harmony. Being that we’ve been [together] all our lives, there’s a little bit of butting heads here and there. But for the most part, we’ve all been on the same path for as long as I can remember.”

As Mexican-Americans and Texans, Los Lonely Boys might be expected to have a sharp perspective on this country’s current fixation on immigration. Yet Jojo largely demurs: “We’re not really political.” But after a pause, he adds, “We try to stand for all people; we’re all God’s people, so we need to stick together and do what’s right. When you’re separating parents and families, that’s a really sad situation.” He remains hopeful, and paraphrases bits from the Gospels, suggesting, “bless the government as well, for they know not what they do.”

Optimism is a key to Los Lonely Boys’ success. The trio has persevered in the face of obstacles that could easily spell the end for another group. In 2013, Henry Garza fell from a stage and suffered severe injuries, necessitating a long convalescence. “I don’t think he’ll ever be fully recovered,” says Jojo. “But I’ve heard him say it it a hundred times since then: he’s 100% happy to be alive.” Not long after that, Jojo sustained a vocal cord injury. And in summer 2015, the three brothers lost their mother. “When things like that happen, we see it as a sign from our Father up above,” says Jojo. “He’s kind of telling us either to speed it up or slow it down, or maybe to stop, listen, look and observe.”

So the band members to put music on hold, and focus on what was most important. “We hadn’t really got down to writing songs,” Jojo says, “because quite honestly there was not a lot of inspiration. There was more inspiration to be with our families, our children, our wives.”

But after time spent back home in Texas doing just that, Los Lonely Boys have returned to the concert circuit, determined to pick up right where they left off. Last year they took part in Quiero Creedence, an all-star album featuring bands and artists from the Latino community. Their reading of CCR’s classic “Born on the Bayou” is a highlight of that disc. 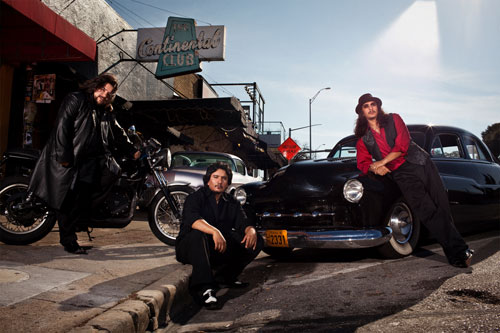 Now back on the road, Los Lonely Boys’ current concert dates are billed as the Revelation Tour. But there’s still plenty of music from the group’s blockbuster debut in the live set. “There’s a push and pull,” Jojo explains. “We’re always trying to please the fans and ourselves. The biggest response from people is to the original album that Los Lonely Boys are known for. So it’s a balance.”

On past tours, Los Lonely Boys have played everything from small clubs to festivals. But on this run of nearly three dozen dates, the group plays mostly so-called showcase venues: concert halls and theaters. Jojo says the band intentionally set out to schedule in those kinds of rooms. “That’s why it’s called a showcase venue,” he says, “because you’re there to showcase something specific, and people are in the mindset that that’s what they’re there for. There’s not going to be a lot of talking, eating and things like that. And even if there is, it’s all just based around having a good time.”

In spare moments on the tour, the band balances music and community, “whether it’s the Latino community, sick children, or anybody,” Jojo says. “Because we’re just humans, all together.”