The style of music known as “psychedelic soul” enjoyed an all-too-brief heyday in the late 1960s. Deftly fusing elements of African American soul and the dreamier end of psychedelic rock, the genre was exemplified by artists such as Sly & the Family Stone and The Chambers Brothers. But the incredibly rich and varied musical landscape of the era meant that any given style didn’t enjoy prominence for very long; something newer always came along to supplant it. In the 21st century, a southern California group called Chicano Batman has developed its own distinctive, modern and original musical personality, based in large part on the influence of psychedelic soul.

Bassist Eduardo Arenas explains that Chicano Batman’s sound borrows timeless elements from music’s past. Songs like “Friendship (Is a Small Boat in a Storm)” – a standout track on the new album Freedom is Free – draw upon “genres that our aunts and uncles and grandparents were listening to,” says Arenas. “Just like a soul band now will borrow from Otis Redding.” 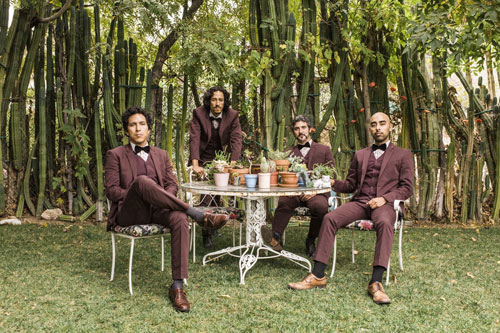 Yet Arenas and his band mates aren’t trying to duplicate the music of days gone by. “We’ve never really seen ourselves as part of that image,” he says, “but only time can tell.” Instead, the music of Chicano Batman evocatively taps into the positive vibes of psychedelic soul.

The quintessential Los Angeles four-piece band Chicano Batman formed nearly a decade ago. The group released its self-titled debut in 2010; after following up that disc with two EPs, the band returned in 2014 with Cycles of Existential Rhyme. After a third EP – 2015’s Black Lipstick – and a single, Chicano Batman released Freedom is Free in March. And in yet another nod to the past, Freedom is Free was recorded the old-fashioned way: using analog tape.

“We’ve recorded our previous albums digitally,” Arenas says. “There’s nothing wrong with digital; it has its advantages, definitely. But all of the records we have in our collections – Earth Wind and Fire, James Brown, Janis Joplin and anything that we have – all that stuff was recorded in analog.” And there’s something about the warmth and directness of recording onto tape.

Part of that has to do with the manner in which Chicano Batman creates music in the studio. Arenas says that the group’s recording method is designed to leverage the band’s strengths. “Our live act is our strongest thing,” he says. “So we don’t go into the studio and multi-track; we play it live, and then we do over-dubs, extra vocals and harmonies and that kind of thing.”

It helps to have a producer who’s experienced at making records that old-school way. “Leon Michels has been recording to tape for several years, so his team at the Diamond Mine has the swing of things,” Arenas says. Describing the producer’s working methods as “minimalist,” Arenas explains that getting the right sound sometimes means “using old mics: not the fanciest things, but the most appropriate for the job that we have to do.”

While Arenas insists that Chicano Batman is not a politically-focused group, there’s no mistaking some of the lyrical messages on Freedom is Free. The original motivation for putting the band together was simple and straightforward, say Arenas. “Get a name on the band, get a project going and then just play. You know, just jam on some songs.” But creativity never exists in a vacuum, and the group was aware of larger issues in American society. “We’ve tried to bring a lot of harmony to every city that we play and in all of the music that we bring, but I think we kind of came to a breaking point,” Arenas admits. And that led to the group’s music taking on a more topical nature.

“The band has been together for nine years; we’ve seen three Presidents already,” Arenas notes. “We saw the tail end of Bush, Obama and now we have Trump. And so a lot has happened over the years. A lot of perspectives.” Those perspectives inform the group’s upbeat, positive and socially-conscious lyrics. “I think the band has become relevant in our changing times,” says Arenas. “The music lends itself as a tool to talk about real issues.”

Chicano Batman focuses on the values that connect people, not the ones that encourage division. In February, White House Press Secretary Sean Spicer announced, “The earth is a very dangerous place these days.” Arenas seeks to put that kind of broad-brush statement into perspective. “Volcanoes are dangerous when they erupt,” he says. “Carbon monoxide is dangerous in the long term. There are a lot of systematic dangers, but there’s no enemy out there.

“I think we create the enemy,” Arenas observes, “and I think we integrate it into our everyday existence. And that’s where it becomes really dangerous, when it becomes a dangerous world. I think greed is dangerous. Greed is so embedded into the system all over the world, and it drives fear.”

Eduardo Arenas and his band mates in Chicano Batman seek to drive away that fear. The solution, he believes, is found in “people coming together and hearing each other out. Once we can start unraveling that fear, I think we can have clear minds to think more freely about how we relate as humans.”

When the band’s lead vocalist Bardo Martinez sings, “Nobody cares to extend a greeting aid connecting lands,” he’s weighing in on immigration policies that involve the planned construction of a massive Berlin-style wall along the U.S.-Mexico border.

But the band is careful not to lay the entire blame for xenophobia upon the current occupant of the White House. “Regardless of who would have been the President, I think the topics are still the same,” says Arenas. And in fact the song wasn’t written specially to address Trump’s “big beautiful wall” at all. “We recorded the album one year ago,” Arenas says, “and it has been in the works for a year and a half.”

Still, Arenas believes that “a lot of policies – especially a lot of these new executive orders – are coming out of a fear for the unknown.” But “Freedom is Free” conveys a definite sense of hope, and a clear focus on the ideas of togetherness. “No amount of negativity can put a dent in me,” Bardo sings.

“Here we are talking about the world and our political atmosphere,” says Arenas, because “our ideologies are us as people.” But the band – whose music combines a late 1960s psychedelic soul vibe with elements of tropicalia and rock – isn’t about polemics; there’s a healthy sense of humor emanating from the group, beginning with its name. “Chicano Batman was just a pet name that [Bardo] had given himself for his compositions,” Arenas explains.

While the core band features Bardo and Arenas plus guitarist Carlos Arévalo and Gabriel Villa on drums, the songs on Freedom is Free feature more instrumentation. And close-harmony female vocals are a key ingredient in many of the songs. So for live dates on Chicano Batman’s current 30-plus date U.S. tour, the band features an expanded lineup. “We’re going to be a seven-piece on the road,” Arenas says. Three female vocalists are touring with the group. “One of them plays the Rhodes and the organ, so we’ve definitely added a different dimension to our live act.”

The group cuts a memorable and striking visual image, with matching ruffled-shirt tuxedos. But Chicano Batman remains primarily focused on the music. Arenas and his band mates are proud of Freedom is Free, released March 3. “When you present the songs on an album, it’s an album,” Arenas says. “But when you see us live, it’s playtime.”