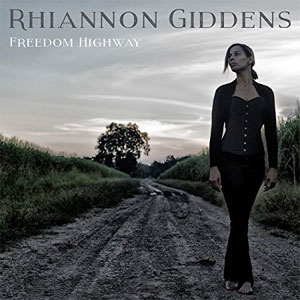 Grammy Award winner Rhiannon Giddens is the well-deserved darling of the burgeoning Americana movement. As a person of color, Giddens adds some diversity into the otherwise largely lily-white scene, but it would be a gross miscalculation to chalk her success up to that fact. As the frontperson for the critically acclaimed Carolina Chocolate Drops, she’s shown herself to be a songwriter and musician of deep nuance and a wide-encompassing musical vision. With other groups and on her own, Giddens has amassed an impressive catalog in little more than a decade. On her own, Giddens has released two EPs, a live album and a pair of studio releases. Freedom Highway continues Giddens’ musical explorations. Here she writes most of her own material, with an emphasis on history and storytelling. Instrumental accompaniment is judicious and spare, keeping the focus on her sonorous and emotive vocals.