Groundbreaking multi-genre guitarist Larry Coryell passed away unexpectedly in February. I’m a longtime fan of his; I first interviewed him in 2014. And then last year I had the honor of curating a reissue – the first-ever on CD – of his second solo album, 1970’s Coryell.

Another Coryell project is in the pipeline right now: a reissue of his Live at the Village Gate album. Almost completely removed form the jazz idiom, this date showcases a power trio: Coryell plus drummer Harry Wilkinson and bassist Mervin Bronson. Its character is closer to Hendrix’s Band of Gypsys than any sort of jazz, though the trio does engage in some tasty improvisation. But it’s of the very heavy variety. 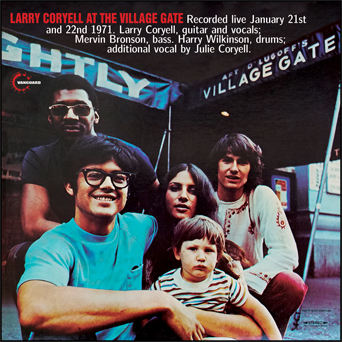 The project was already underway when Larry passed away, but happily I connected with Harry Wilkinson. He shared his memories of working with Coryell, and specifically the pair of gigs that yielded Live at the Village Gate. He was also kind enough to share a photo from his personal collection. A Polaroid, it was in pretty bad shape – cracked, stained, and faded – but I spent some time fiddling in Photoshop and improved it a bit. The photo shows him and Coryell onstage in Chicago in early 1973. By that point in the timeline, the group was a five-piece.

The librarians at the Chicago Public Library were kind enough to provide me with a copy of a review of the very show depicted in this shot. I’ve posted that below as well.

Live at the Village Gate will be out soon – more details to come – and it’s a must-purchase. Not because I wrote the liner notes and did the package design (though none of that hurts), but because it’s a superb set of music and a slice of history. 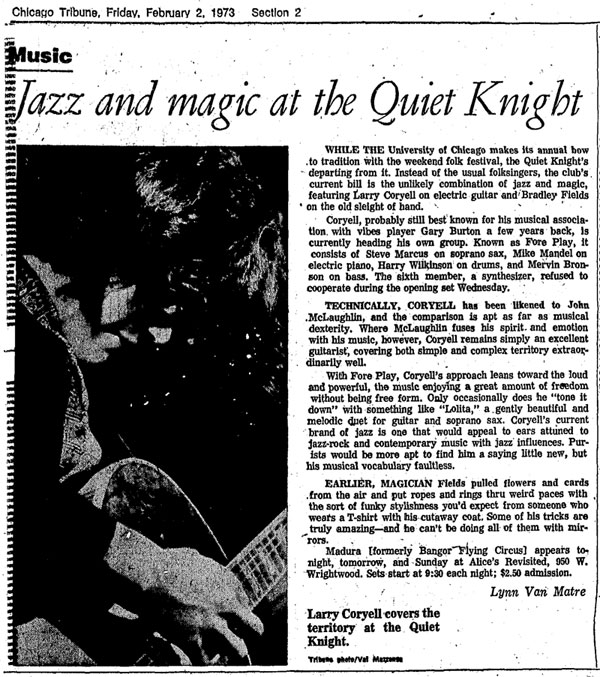