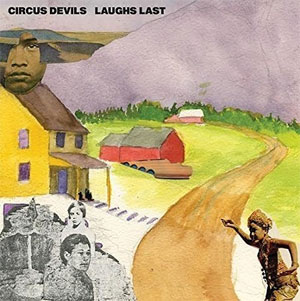 File next to: Guided by Voices, Flaming Lips, Starling Electric

Seemingly random – yet reliably clever – wordplay has long been a hallmark of Robert Pollard’s work. Along with prodigious output, that quality is something he shares not only with his primary group Guided by Voices, but with long-running side project Circus Devils. After more than a dozen albums, and for reasons known only to the principals – Pollard and brothers Tim and Todd Tobias – the group has decided to suspend operations. The straightforwardly (and aptly) titled Laughs Last is the trio’s swan song (a best-of, Laughs Best, is being released simultaneously). The band explores a wider sonic palette than GBV: the hypnotic “Into Gear” is positively spooky. And with “To Each His Zone (Sunshine Baby Butt),” yet again Pollard indulges his penchant for tricking-up a perfectly accessible melody with an off-kilter beat. Laughs Last is both representative of Circus Devils and a fitting farewell.