Empire Strikes Brass managed quite a feat in its first five years as a group. The 10-plus-piece band worked diligently on a grassroots level, playing benefits and street festivals, and became a household name in its hometown of Asheville without releasing an album. When the group finally entered the studio it recorded not one but two albums. Empire Strikes Brass will celebrate the release of the first of those — the aptly-named Theme for a Celebration — with a Saturday, Feb. 25, show at Isis Music Hall.

The band came together in 2012 almost by accident, according to saxophonist Pauly Juhl. “A friend’s sister was getting married,” he recalls, “and she wanted a New Orleans-style brass band for her rehearsal dinner. My friend asked me if I could put a group together, and said, ‘Here’s a thousand bucks.’

“I was like, ‘I can make anything happen for $1,000,’” Juhl says with a laugh. He assembled a five-piece group, and the ostensible one-off gig was a success.

“We were really inspired,” Juhl says. “So we tried to get as many musicians as possible together, just to see what came of it.” The initial plan was to play street marches, but when the musicians contacted their friends in Yo Mama’s Big Fat Booty Band, things quickly went to the next level. 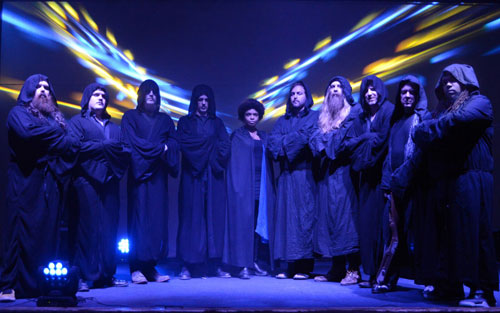 The Booty Band was finishing its set, at what would turn out to be the final Bele Chere Festival, in 2013. “We gathered in the middle of the crowd,” Juhl remembers, “and as soon as they finished, we fired up and paraded over to the Asheville Music Hall, taking the crowd with us.”

Around that time, another friend asked the all-brass band to play his wedding. “He asked if maybe we could add a guitar player, a keyboard player and some vocalists,” Juhl says. In short order, Empire Strikes Brass evolved into its present configuration. “We had a marching band and a stage band, and we just kept going from there,” says Juhl.

For the next few years, Empire Strikes Brass put its energy into live performances, like Downtown After 5. “We like being involved with events, fundraisers and parties, rather than playing small venues and doing one thing at a time,” Juhl says. He emphasizes that instead of club dates, Empire Strikes Brass often pursues gigs in front of larger crowds as part of multi-act events.

Another way that ESB spreads goodwill – while promoting its brand – is via sit-ins. “There have been times when the name Empire Strikes Brass was represented at two different local venues at the same time,” Juhl says. “Some members over here and some over there, collaborating with different groups.

“If we’re opening for somebody, we’re willing to get up on stage and play some tunes with them,” says Juhl. “And if someone’s opening for us, we make the whole evening as much of a collaborative effort as possible.”

With all that activity — plus the fact that most of the busy musicians in Empire Strikes Brass play in at least one other project — the business of making an album didn’t become a priority until recently. That changed when the band’s membership — constantly in a state of flux — coalesced. “We settled on the lineup we have now a year or so ago,” says trumpeter Alex Bradley. “With that out of the way, we could figure out what kind of sound we wanted when we started putting the album together.”

Moreover, sorting out musical parts for a recording session involving 10 or more people is inherently complicated. “The band was in a state of organization, trying to get that many horn players together,” says Debrissa McKinney (vocals, saxophone). “So … it took awhile.”

The cost of recording so many musicians was a challenge, too. So in August 2016 Empire Strikes Brass initiated a Kickstarter campaign. The band’s goal was to raise $15,000 in 90 days. “That’s a lot of money,” Juhl readily admits. Initially he thought, “Wow. I don’t know, guys. Are we asking for too much?”

But the band was ambitious, and thanks to the group’s dedicated fan base, the campaign exceeded its goals. Plans called for two albums to be made using the Kickstarter proceeds. Theme for a Celebration was officially released on Feb. 3; the second album — a collaboration with DJ Push/Pull — is complete and is tentatively scheduled for release in March.

“We recorded a lot of the horn work live in the church room at Echo Mountain,” McKinney says. “We went in for the feel.” The band, as featured on Theme for a Celebration, also includes Kyle Snuffer on trombone, guitarist/vocalist Kelly Hannah, Sean Donnelly on keyboards and vocals, trumpeter Jerome Widenhouse, Henry Westmoreland (Sousaphone, trumpet) and drummer Nik Hope. DJ Push/Pull appears on select live dates, and the group’s current tour features guest guitarist Andrew Scotchie.

“We were learning a lot about how to work together in the studio for the first time,” says Juhl. Empire Strikes Brass is well-equipped to build on its collective knowledge in the future: “Now we understand even more about what it takes for us to go to the studio and lay down an album.”

As successful as the studio sessions were, at its core, Empire Strikes Brass remains a live act. At festivals, it’s not uncommon for the collective to lead listeners on a late-night parade. “People always have a lot of fun at those,” says McKinney. “They get to feel up close with the musicians. And for us, it’s one more way to feel connected with the people who we’re playing for.”